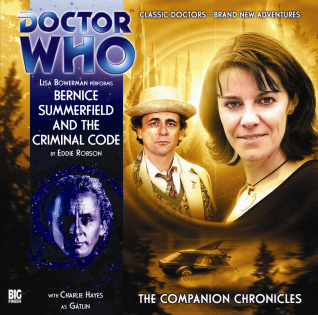 Being an huge fan of the Virgin New Adventures, I was really keen to hear a Companion Chronicle starring Bernice Summerfield. Not that I am actually a fan of the character. I find her a bit too overconfident and clever, as well as annoyingly Leftist in a self-righteous way. Arguably, she is a Mary Sue for fannish Doctor Who writers. Yet it is significant that she was the first non-televised companion to have her own Companion Chronicle. She is indeed a memorable and popular Doctor Who companion in her own right. She is also a character who is always going to deliver great dialogue, even if it is irritatingly cocky.

While there are a lot of continuity nods to the Virgin Doctor Who novels in this story, this very much feels like a Bernice Summerfield adventure, with the futuristic archaeologist once again investigating another weird planet. The Doctor takes a back seat for much of the story, with the focus thrust onto Bernice. Unlike a typical Katy Manning or Carole Anne Ford companion chronicle, this is not really about the Doctor. Yet the descriptions really do manage to create a mental image of McCoy's mannerisms and evoke nostalgia for both Seasons 24-26 and the Virgin novels.

I rather wish that this had been a story featuring 'New Ace' as well as Bernice. I would love to have heard Lisa Bowerman attempting to create the mature voice of Sophie Aldred's character. Incidently, I rather felt that Sophie Aldred failed to really capture the Virgin books conception of Ace in Shadow of the Scourge.

It's not the most exciting story. It's a little bit 'talky' with some big information dumps and it does not move all that quickly. Nevertheless, it kept my attention better than a lot of audios and delivered a reasonably interesting, if not altogether Earth-shattering tale.

Lisa Bowerman delivers the narration expertly, and unsurprisingly so given that she has directed plenty of companion chronicles. A lot of reviewers have complained about her imitation of McCoy's voice. She does not get it quite right; it's a bit too Scottish, nevertheless it is fun to listen to. Lisa Bowerman's skillful delivery is not really matched by her co-actor, Charlie Hayes, who fails to really bring much to her role.

For those who love the Seventh Doctor in a linen safari suit, this is definitely worth a listen.
Posted by Matthew Celestine at 10:24