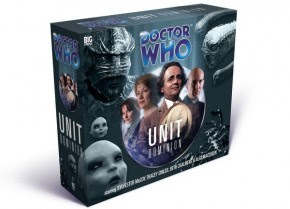 When the announcement was made about a year ago that Tracey Childs would be reprising her role as Elizabeth Klein, I was absolutely over the moon. I totally fell in love with the character of Klein in her trilogy.

UNIT: Dominion is possibly one of the most ambitious projects of Big Finish. This four-part audio series features not only the return of Elizabeth Klein, but also a new team of UNIT, the later era Seventh Doctor re-united with Raine and a previously unknown incarnation of the Doctor. Furthermore, this unlikely team are faced against a bewildering array of extra-dimension alien beings across several international locations. This is a story on an epic scale that could never have been realized on the small screen.

As anyone who heard the Klein trilogy would have expected, Tracey Childs puts in a glorious performance as our Aryan heroine. This is not the Nazi Klein we have previously seen, but a Klein who worked as scientific advisor to UNIT. She is portrayed as psychologically troubled, haunted by the 'Umbrella Man' and the sense that he is spying on her.

I had assumed that the UNIT Klein is the version of Klein that was mean to exist in our universe and which had existed prior to the Second World War when the timeline diverged. This is not made clear in this audio. No details of Klein's past in this timeline are given, leaving open the bizarre possibility that she just materialised in this timeline as somebody working for UNIT. I do hope the writers did not intend such a notion. Dating UNIT stories opens up a minefield of complexities, but the timing of this story is left vague, leaving open the possibility that this is the same Klein who was presumably born in the 1930s (in my fan fiction I pegged Klein as born in 1935). This story is clearly set before Battlefield. There is no mention of internet phenomena such as Google. The only certainty is that it is set after 1985, as Sergeant Wilson is pictured holding an SA 80 rifle. 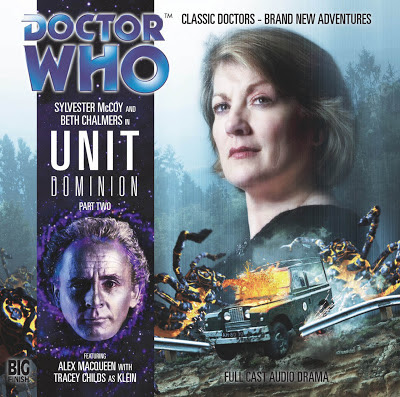 On the whole, Klein is written well. She may not be a Nazi, but she is cold and ruthless. Her interaction with Raine shows she likes being the alpha bitch. This is softened by her real emotional problems as a result of her awareness of the Doctor. On the other hand, she does come across as a little two-dimensional at times. We are led to believe that she spends nearly all her life in a laboratory. Clearly she does not, as she obviously goes to the hairdressers to keep her helmet-shaped hair in trim. A few more details about Klein's life would help to humanize her a bit more.

The lack of detail about Klein touches on the other difficulty with the way the character is portrayed. She very much props up a rather sexist trope about powerful and successful women being lonely, isolated and frustrated. There is a definite cultural subtext here about women being unable to have a high-powered career without sacrificing a meaningful and well-adjusted personal life.

Alex McQueen plays the Other Doctor. The characters are led to believe that he is a future incarnation of the Doctor, until they discover the truth. You can certainly sympathize with them, McQueen gives an immensely Doctorish performance. I can't be the only listener who was expecting some really complicated explanation for the Other Doctor, probably involving parallel universes. The last thing I expected was for him to be the Master. Yes, the Master. An explanation so obvious that it does not occur to any sensible fan. It just shows that an old trick can work if it is done right. Remarkably, McQueen gives a performance as the Master which could almost equal those of Delgado. He is certainly the campest Master we have seen, yet he absolutely ruthless and cruel. He is the Master done right.

With Klein occupying the limelight, Raine is left a little in the shadow. I'll admit I am not a big fan of Raine. She comes across as too much of a generic companion. Yet Beth Chalmers still gives a good performance and works well as a contrast to Tracey Childs. I can see why Big Finish chose to run with Raine; they used her for 'Season 27' and they wanted to give her a comeback.

The UNIT we see here are not quite as Dad's Armyish as the Seventies UNIT, but both their commanders are rather inept. We are given a bit of emotional drama with Sgt Wilson, who is about to become a father. This might have come across as more refreshing if it were not for the irritating and sentimental obsession with fatherhood displayed in the last couple of Doctor Who seasons under Moffat.

Near the end of the story, Klein is injured by a gunshot and we are teased with the possibility that the character might be at an end. Yet she survives and we can hope that she will make another appearance with a revitalized UNIT team. My only hope is that they get Klein out of the laboratory a bit and give her a bit more of a life. Maybe even give her scene in an hairdressing salon!

Posted by Matthew Celestine at 07:44