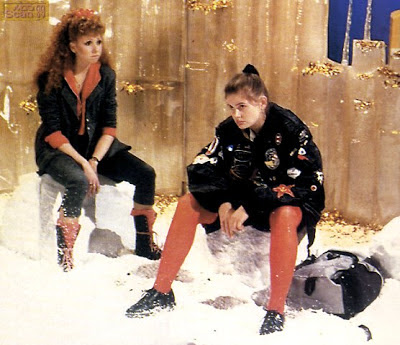 You know, the really big problem I have with Dragonfire is that it is set on an ice planet, yet nobody gives the slightest indication that they are cold. This might seem like a small fault, yet it is glaring all the more for the fact that this story is so visually strong. Dragonfire is blessed with beautiful sets and pretty decent effects that have been achieved on a woefully low budget. Yet the failure of direction displayed in the lack of 'cold acting' lets them all go to waste. If ice does not feel cold, then it is just glass.

Dragonfire is most notable for its introduction of Ace. Ace is a refreshing in having much more depth of personality than other characters. The moment at which she is tempted to serve Kane as a mercenary is beautifully done. Yet Sophie Aldred never really convinces us in her portrayal of a rough teenage girl. Aldred was always at her best when she forgot about trying to sound like an aggressive working class girl and just played Ace as a slightly otherworldly middle-class girl. That was not how the character was supposed to be, but it suited Aldred far better. Aldred saying "I don't need no mum and dad" just sounds embarrassing.

As well as the arrival of Ace, we get the departure of Mel. Her decision to leave the TARDIS is as hurried and unprepared for as that of any companion. It is slightly disappointing because she has such a great rapport with Ace. Perhaps a few adventures featuring Ace and Mel together might have made the latter more fondly remembered. Note that Mel is wearing combat boots with red laces. Everybody in this era of Doctor Who seems to have a slightly Punky appearance, even Mel.

The return of Sabalom Glitz is a disappointment in a season remarkably free from past references. His transition to lovable rogue is rather jarring, even if he has a good chemistry with McCoy.

The plot leaves an awful lot to be desired. One might have thought that after over a thousand years, Kane would have found a way to escape or at least to find the secret of the key hidden in the dragon creature. It does not feel very well thought-out. We also get some appalling direction, such as the literal cliffhangar with the Doctor.

McCoy does quite a bit of clowning in this story. I think on the whole his performance was better in Delta and the Bannermen. However, I love the moment when he regretfully tells Belazs that she will never be free from Kane. This is very reminiscent of the dark Doctor of Cat's Cradle: Warhead who passes judgement on characters in that book. His intellectual discussion with the guard is also a nice touch.

The multitude of film references in Dragonfire is very clever and works well with the strong visual elements of this story. It is just unfortunate that this story does not quite lift itself above mediocrity as Paradise Towers and Delta and the Bannermen do. Dragonfire lacks both the sinister and surreal atmosphere of Paradise Towers and the joyous magic of Delta and the Bannermen.

Posted by Matthew Celestine at 10:46