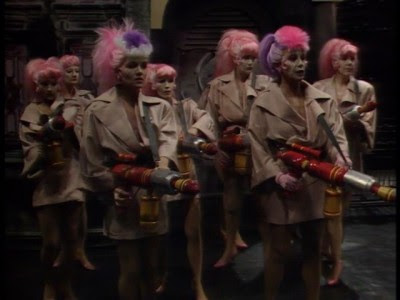 Like Delta and the Bannermen, the title of The Happiness Patrol is a reference to Indie music. This is just an example of the way the McCoy era exudes cool. No other era of Doctor Who has this sense of being in touch with pop culture.

The Happiness Patrol is perhaps best remembered for the Kandyman. This Bertie Basset lookalike has drawn much mockery. Yet I would suggest that he is one of the greatest Doctor Who monsters ever created. Unlike so many other monsters, the Kandyman manages to avoid looking like a man in a suit. It's high pitched voice is delightfully sinister. A quite wonderful piece of terrifying surrealistic madness. He is also given a fascinating symbiotic relationship with his creator, Gilbert M. 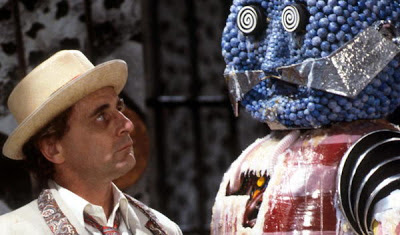 Probably the greatest strength of this serial is how differently it looks and feels from other Doctor Who stories. It feels so fresh and original. It has a striking visual look with an immensely effective use of colour and shade. It also has a plot free from half-thought out hard Sci-Fi elements always end up creating confusion.

The subtext of The Happiness Patrol has been endlessly discussed and dissected by fans. Sheila Hancock is clearly imitating Margaret Thatcher and her husband is obviously Dennis. Yet the story is not simply a satire of Thatcherism. The references to townships echoes Apartheid South Africa and the disappearances bring up the spectre of South American dictatorships. Some have seen in it a subtext about homophobia. It is a multi-faceted story, but not one which becomes didactic or attempts to do too much as the audio Jubilee does.

What is particularly striking is how prophetic this story was. Not long after this story was broadcast, the Communist dictatorships would fall in a similarly bloodless manner to the downfall of Helen A's regime. People in these countries would simply get tired of doing what they were told and living under lies.

Sheila Hancock's performance as Helen A is very impressive. It is rather a shame that she was herself dismissive of the story. It is very clear from her portrayal that Helen A genuinely believes in her ideology of forced happiness. I also very much like Priscilla P. She seems to be the only inhabitant of Terr Alpha who tries to look happy. This perhaps fits with her fanatatical nature. Sylvester McCoy's performance shows considerable improvement from that of the previous season, even if it does become a little bizarre towards the climax.

The sets have been criticized as looking tacky, but I quite like them. They have the look of a faded, worn-out old theatre. It is interesting how the very stagey, simplistic sets are reminiscent of the less polished sets of the Hartnell era. The costumes are wonderful; they are so colourful. Of course, it is absurd that the Happiness Patrol dress that way. That is the point. Dictatorships always have something ridiculous about them. Just look at the way the North Koreans celebrate the birthdays of their leaders. The music also deserves a lot of praise, with both the lift Muzak and the bluesy harmonica. I especially like the moment when Earl switches to a happy tune as the Happiness Patrol go by.

I am glad that Helen A is not killed in the end. In a Hinchcliffe or Saward story, she would died an horrible death. Here she is defeated by her own inconsistency. It is a beautifully poignant moment when she weeps at the death of her pet. Presumably, she is tried and imprisoned for her crimes later.

The story suffers a little in places due to editing, but on the whole the fast pace works very well and it is a great example of how three-episode stories can be effective. The Happiness Patrol is one of the highlights of 80s Doctor Who and one of the greatest of Doctor Who serials.

Posted by Matthew Celestine at 05:18