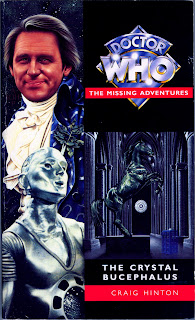 The late Craig Hinton's novels are best remembered for their multitude of continuity references. Personally, I find these rather fun. They were rather well done in Millennial Rites, which I very much liked. They got a little silly in Quantum Archangel, but that novel was alright in places. The Crystal Bucephalus is perhaps most well known for offering an explanation for the absence of Kamelion for most of the stories of Season 21, as well as the change of look to the Console Room in The Five Doctors.

I read most of Crystal Bucephalus in one go. It has the makings of a very good Doctor Who novel. It handles the regulars very well and gives them a much needed temporal change of outfits. It has a fascinatingly soap opera feel, with an odd emphasis on the relationships between the non-returning characters. The premise of the Doctor investing in a time-travelling restaurant is an imaginative one. We also get some hints about the future destruction of Gallifrey and the Time Lords, which are poignant now that we have seen the new series. The influence of Douglas Adams in its themes is very apparent.

What lets down The Crystal Bucephalus is the unbelievably high volume of techno-babble. This could rival a Star Trek novel in its use of jargon. I'm afraid to say I found much of the plot practically incomprehensible. Coupled with this techno-jargon are a number of 'time-wimey' elements that typically add to the confusion.

Still, it has some fun moments and offers a somewhat different take on the team of the Fifth Doctor, Tegan and Turlough than what we saw on screen. For instance, where on television, Tegan did a lot of very unfeasible running in high heels. Here, she does a Romana I and kicks them off to run about in her stocking feet!
Posted by Matthew Celestine at 04:09