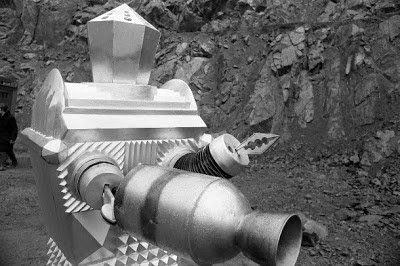 I am sure I am not the only fan who watches The Krotons and finds himself wanting to say everything in a Kroton voice. The Krotons' mock South African accents have me in stiches for a good deal of this serial. In the unlikely event of their ever returning to the televised show, I do hope they don't change this detail!

There is a lot more to watching Doctor Who than simply enjoying silly-looking monsters, but sometimes this can be a big part of it. For me, The Krotons is a story where that basic enjoyment of silly monsters really kicks in. The Krotons are one of the silliest looking monster races ever to appear in Doctor Who. I love the way they prod and pinch Jamie with their little pincers! Nevertheless, the Krotons, despite their ridiculous appearance, are quite an imaginatively conceived alien race. They are grown from crystalline matter, which rather sets them apart. They are also very cruel and brutal, despite their silliness. This is why their return in Lawrence Miles' novel Alien Bodies worked so well. Miles was able to capture perfectly the tension between the silly appearance of the Krotons and their disturbingly violent nature. The scene in Alien Bodies where a Kroton is destroying a Dalek is a very memorable and haunting moment.


The Krotons might seem a forgettable story if not for two important facts. Firstly, it is the first Doctor Who story to be written by Robert Holmes and secondly, it features the first appearance of Philip Madoc. As a Robert Holmes script, The Krotons comes across as rather unremarkable. It certainly lacks the wit and exuberance of his later work. Some of the ideas in this story would later find their way into Mysterious Planet. Philip Madoc's appearance here has all the charm and quality of his later appearances. He injects layers of depth into his performance that are entirely lacking from the other members of the guest cast. In particular, its fascinating to watch how he reacts to the dawning realisation that it is safe to go into the wasteland.

The snake-like electronic probe is an impressive effect. Unfortunately, much of the rest of the visual designs are a good deal less impressive. The Kroton's ship is supposed to be grown from chrystalline matter, yet it looks like any old metal spaceship. It really ought to look like Omega's palace in The Three Doctors. The model shot of the Gond's village also fails to match up with the interior sets.

The regulars are on top form here and the script offers some great material for the Doctor and Zoe. We have some priceless moments between the two of them, such as their rivalry in the Hall of Learning and their pretend bickering in the Krotons' ship. Jamie is good, but he suffers for having been separated from the Doctor and Zoe.

My big problem with this serial is that the planet is too much like a typical poorly realised world. Like so many Star Trek episodes, this is a planet with a population of ten people all living within one square mile. Remarkably, the much hated Dominators actually does a much better job of realising an alien world. An easily missed piece of dialogue in The Dominators mentions fires, floods and earthquakes. For all its apparent dullness, there are natural disasters on Dulkis. It is a planet where things happen. The Krotons does not give any sense of what life is like for the Gonds beyond the story.

Posted by Matthew Celestine at 07:48