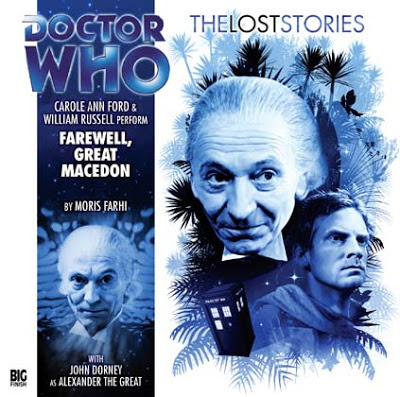 Farewell, Great Macedon is an audio story based on an unused script that was written at the time Marco Polo was broadcast. It is narrated by William Russell and Carole Anne Ford, with additional voice acting from John Dorney as Alexander the Great. This story was included in Big Finish's First Doctor box set. This script has been adapted by Nigel Robinson, a wise choice given the many Target novelizations he has written.

I am amazed at the ambition and vision of Big Finish in setting out to create a six-part Hartnell historical in the absence of the lead actor himself. Farewell, Great Macedon is a triumph in its success in capturing the feel and tone of this genre. Listening to it feels so much like the sensation of listening to the reconstruction of a wiped serial, except without the pain of staring at unmoving photos.

There is a sense of inevitable sadness in listening to William Russell and Carole Ann Ford perform with the absence of William Hartnell and Jacqueline Hill. Yet they do so quite admirably. The presence of the Hartnell Doctor seems to fill this whole work, not just through Russell's delightful imitation of Hartnell, but also through the way the dialogue captures his eccentricity. His dismissal of the suggestion that the TARDIS crew are in heaven because he does not know the way there is lovely. The moment where he walks enthusiastically over hot coals is very memorable. I laughed my head off when the Doctor shows a little half-heartedness at the notion of sacrificing himself for Ian.

Perhaps the story struggles to capture Barbara as effectively as it does the First Doctor. Carole Ann Ford tries hard to imitate Jacqueline Hill, but she is not so easily impersonated as Hartnell. Yet despite her manifest absence, Barbara has some wonderful moments throughout the story. Her knowledge of history makes her place in this story a tragic one. Knowing full well that the death of Alexander is imminent, she cannot bear to remain in Babylon.

John Dorney is suitably impressive as Alexander of Macedon. While he is portrayed as a man given to wine and strong in his temper, he is also portrayed as visionary and a humanist who longs to unite mankind in peace and brotherhood. His death is presented as a tragedy. Perhaps the story makes a little too much of this tragedy. Alexander created the largest empire known to the ancient near east. It is remarkable that he achieved so much, rather than that he did not achieve more. Furthermore, Alexander made a lasting impact on history through the spread of Hellenistic civilization.

I did find one moment in the story irritating from an historical point of view. This was when Ian offered a rather simple argument against slavery and Alexander and two of his generals offer agreement. Really? There whole society was built around the idea that their is a fundamental difference between freemen and slaves and they just drop it after hearing one argument from a foreigner? I was disappointed at the writer's failure to empathize with those he is writing about.

The plotting of this story, even by the standards of the Hartnell era is a little simplistic. The TARDIS crew arrive, meet Alexander, murders happen and the team find themselves accused. There is a certain sense of deja vu in hearing the regulars get accused of another murder and this is made worse by the fact that we see it coming from the first episode. I also find it hard to believe that so much lengthy dialogue would be included in a televised story, particularly the huge chunks of speech we get at the end. Yet this does not all detract from the beauty and nobility of the story and its dialogue. This is historical Doctor Who done beautifully.

What is especially fascinating is how the story deals with history and whether it can be changed. Following the lead of The Aztecs, Farewell, Great Macedon states in no uncertain terms that history can never be changed. Yet surprisingly, this does not deter the Doctor from interfering. The Doctor feels a sense of duty to help Alexander, even knowing that it is pointless if history decrees his death. I think this is a very elegant approach and helps to explain how time works in Doctor Who. It has often been pointed out that the Doctor does not seem to afraid to meddle in future human history or on alien worlds. But is he really working against the history of those events? We need not assume that if the Doctor cannot change history, he should be deterred from getting involved in it. If his interventions work toward the flow of history, so much the better, if his interventions fail, it does not matter; he cannot alter the course of history. If he cannot change history, he can do no harm by interfering.

This story is a worthy recreation of a lost era.

Posted by Matthew Celestine at 13:19