The Greatest Show in the Galaxy 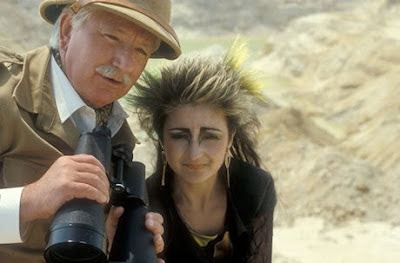 You're not only a scoundrel and a meddling fool, but you're also a crushing bore!

The Psychic Circus may not be the most impressive looking big top, but this story has a visual look that captures the eye delightfully and makes vibrant use of colour. There are many symbolic flourishes, such as the mystical eye symbols and the hearse and funereal outfits used by the clowns when they go out hunting. The costume work is among the best of the era, even if we have to forgive the less inspiring werewolf effect on Mags.

The plot structure of this story is very unusual and in places it feels a little awkward, yet the sense of uncertainty means that it does not fail to induce excitement and tension. A lot in this story does not make a lot of sense. However, it is quite different from Ghost Light. Ghost Light was confusing on the first viewing, but everything in that story can be pieced together if one makes the effort to watch it several times and listen to the dialogue carefully. Greatest Show in the Galaxy offers no explanations. The reader is left to interpret the significance of much of it.

It's fascinating how so much of the Sylvester McCoy era makes use of a metaphorical depth in its storytelling. We have all that stuff about 'undercurrents' in Curse of Fenric, the power of life in Delta and the Bannermen and Survival's cryptic theme of menstruation. However, it is Greatest Show that really goes to town on metaphor. None of the characters feel like real people, but more like archetypes. Much fan discussion of the story has centred on what the individual characters represent. Do the Gods of Ragnorak represent BBC executives or the public? Does Captain Cook represent the show's past or Star Trek?

While much of the theme is left uncertain and for viewers to puzzle out for themselves, the story most definitely raises a question about the values of the Sixties. The Circus people are hippies who have betrayed what they once stood for and sold out. One suspects that the targets here are individuals like Richard Branson and George Lucas, figures who rose up from the counter-culture to become commercial masterminds. Doctor Who is itself a product of the Sixties and the story throw open the question- has Doctor Who gone wrong? Has it become pointlessly violent like Nord, or obsessed with its past like Captain Cook? Is it hopelessly out of touch, like Whizzkid?

Captain Cook the Intergalactic Explorer is a brilliantly conceived character in that he represents a kind of pseudo-Doctor. He is a restless explorer with a boundless curiosity. He travels with a punky young woman who has a dangerous side. He is also a figure with somewhat colonial leanings, reflecting the Doctor's Edwardian tendencies. The Seventh Doctor would eventually take to wearing a safari suit himself in the New Adventure novels. With his obsession with past adventures, the Captain is Doctor Who gone wrong, sadly like too much of 80s Doctor Who (though the Whizzkids of fandom probably have an inflated view of much of 70s Doctor Who). T.K. McKenna brings him to life marvelously, though this unfortunately makes it a disappointment that he dies. It would have been nice to have seen a return from him. My favorite moment in the story has to be the look on the Captain's face when the Doctor calls him a 'crushing bore.' He looks so surprised and so furious.

Captain Cook's companion, Mags, is equally fascinating. She clearly disagrees with the Capatain's methods, but she sticks around with him and takes his orders. It's never altogether clear what Mags thinks of him. I can't help thinking that they are probably sleeping together. If the Captain represents slavish obsession with continuity, then Mags represents Doctor Who's capacity to terrify. The show has always aimed to scare and thus her character survives. It is noticeable that Mags is dressed like a Goth. As the Seventh Doctor era shifted into the New Adventure era, Doctor Who would develop close ties with the Goth subculture.


There have always been elements of Doctor Who that lie more in the realm of fantasy than science fiction- the Land of Fiction, the Celestial Toymaker and the Mara. Yet it is in the Seventh Doctor era, that the show makes a conscious shift to include overtly supernatural elements. Greatest Show is very much a story that is more fantasy than science fiction. The only real technological element here are the robots. We get no explanation as to how the kites work or how the ringmaster and Morganna disappear. Likewise the Gods of Rrrragnorrrak seem to be real gods. There is no suggestion that they are just aliens like Sutekh (even if they look a bit like him). According to All-Consuming Fire and Millennial Rites, they are Old Ones, powerful beings from a primordial pre-universe.

Sylvester McCoy gives a really great performance in this story. It is here that we really see the 'Dark Doctor' coming to life more than ever before. He appears to manipulate Ace into going to the circus, he seems to have an unstated agenda and he clearly knows a lot more about what is going on than he is letting on. We get a definite sense that what we are seeing is only a part of some larger cosmic game that the Doctor is playing. The Doctor's statement that he has been battling the Gods of Ragnorak throughout time and space is interesting. It is very similar to the way that we meet Fenric in the next season, a villain who turns out to be the Doctor's worst enemy, even though we had never heard of him before. This certainly throws a lot of mystery about the Doctor's activity. However, it could be that the Doctor is referring to Great Old Ones in general, and so would include encounters with the Great Intelligence (Yog-Sothoth) and the Animus (Lloigor). Though it was actually a mistake, this serial gives us the most inconic image of the Seventh Doctor ever, when he calmly walks away from the exploding circus. This image does so much better at demonstrating the presence and power of the Doctor than any rant by Matt Smith about how impressive he is and how scared the monsters ought to be of him.

We are treated to a lovely score by Mark Ayres. I found the rapping a bit annoying at first, but it grew on me. It sort of adds to the surreal atmosphere of the circus. A mention must go to the Chief Clown, played by Ian Reddington. Every moment that he appears onscreen is a pleasure, with his expressive hand gestures and his two distinct modes of speaking. I love the nervous tremor in his voice, when he is speaking without the clown persona. 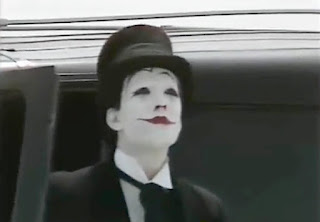 The Greatest Show in the Galaxy is a fantastic example of how Doctor Who can triumph over a troubled production. It is not perfect and is not the greatest Seventh Doctor story, yet it has a brilliance that seems to defy categories and draws the viewer into an unearthly and surreal world of its own.
Posted by Matthew Celestine at 07:07