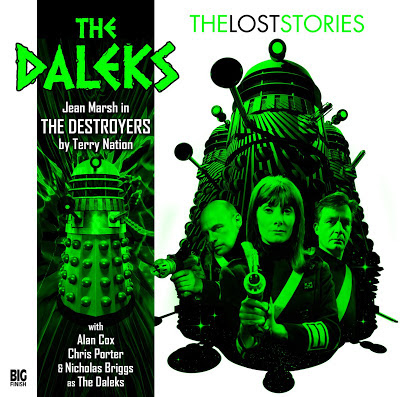 The Destroyers was an unmade pilot episode for Terry Nation's dream of a Dalek TV series. It was produced as an audio by Big Finish, with Jean Marsh starring as Sara Kingdom and the narrator. It is included in the Second Doctor Lost Stories box set.

Given that this story features no deceased Doctor, we might have expected it to be produced as a standard full-cast audio drama. However, Big Finish opted not to do this, as they wanted to keep it as faithful as possible to Terry Nation's very visual imaginings. This audio therefore combines a full cast with narration based on Terry Nation's stage directions. These stage directions are really well written and dripping with melodrama. This is a decision that really makes sense.

This is in every way a Terry Nation story. That means that we get a rather dull and unimaginative plot that is essentially a collection of his action set pieces. We simply get the characters moving between one peril and another. All of the Terry Nation tropes are present- a jungle, carnivorous plants, tough macho types, monsters and caves. The characters lack any real depth.

I had expected Sara Kingdom to be a bit of a Mary Sue in this (plenty of people have noticed the similarity of her name to the writers), but her vulnerable side is very much on display. That ought to be a good thing, though Nation possibly overdoes this; I would expect a Space Security Service agent to come across as a little bit tougher than she appears in this. Interestingly, Sara is given a new brother. She seems a good deal more affectionate towards this brother than she was to Brett Vyonn! One gets the impression that Nation had no interest in tying this story to Doctor Who continuity.

Jean Marsh does a great job of playing both Sara Kingdom and narrating the story. She makes these two roles distinct by using two quite different voices. She puts a good deal of expression into her reading of Nation's stage directions. It makes a massive contrast with Frazer Hines' bland and slightly sarcastic narration on the BBC soundtracks.

This is by no means a great story. It is basically a Doctorless version of all the Nation-by-numbers that we have seen. Yet I am glad that Big Finish made this. It gives us a brief glimpse into a series that never was. The retro Sixties style theme tune is great too.

Posted by Matthew Celestine at 11:29