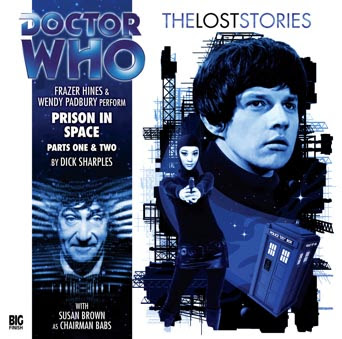 Prison in Space is an unmade story by Dick Sharples that was considered for Season 6. It was adapted as an audio by Simon Guerrier and included in the Big Finish Second Doctor box set. It was narrated by Frazer Hines and Wendy Padbury, with additional voice acting from Susan Brown as Chairman Babs.

In the second volume of TARDIS Eruditorium, Philip Sandifer includes a bonus essay on Prison in Space. He argues that this story is sexist garbage that was very sensibly rejected. He suggests that the decision by Big Finish to recreate it was unwise and in rather poor taste. As reactionary as I am, I think Dr Phil is absolutely right. This story is an appalling piece of sexist trash and I cannot think of any way in which it could be justified. Which goes to show that Doctor Who fans like me will buy anything.

This story is about a future in which feminists have taken over the world and made men into second class citizens. Rebellious men are locked up in the space prison. Call me politically correct if you like, but in a world where millions of women are the victims of domestic and sexual violence, the whole story just leaves a bad taste in the mouth. While I disagree with the ideology of Feminism and hold pretty conservative views about society, I think joking about crazy feminists is just a way to ignore the realities of real injustices against women.

I wondered if the plot would be adapted a little to make it more palatable, but there was no evidence of this. I don't even detect any hint of irony in this production. Having Jamie give Zoe a spanking to teach her a woman's place is not funny; it is completely tasteless and a slap in the face of everything which Doctor Who is about.


The tragedy is that Prison in Space is actually a really great production. The adaption is very well crafted and uses descriptions that work on the imagination beautifully. Wendy and Frazer give great vocal performances with a lovely immitation of Patrick Troughton. It's just a shame these strong production values are wasted on such a worthless story.

Posted by Matthew Celestine at 10:19