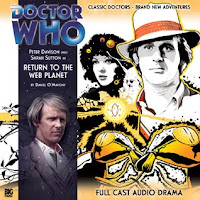 The Fifth Doctor and Nyssa go to Vortis, the planet of Menoptera and Zarbi.

I really like The Web Planet. There seem to be a large contingent of fans who like to mock and criticise that story. They are probably the fans who are not into the black and white era anyway. Its true that there are plenty of problems with the production of The Web Planet, but you have to admire the boldness of what the production team were attempting in creating a world without any humanoid inhabitants.

The Web Planet might have been poor in some respects, but it was rich in atmosphere. There was really a sense of being taken to a strange, unearthly planet. Return to the Web Planet is also rich in atmosphere. This time, instead of the creepy, barren lunar landscape, we are treated to a world of dense flora; a vast and unearthly cosmic garden, a suitable habitat for the weird insectoid lifeforms. This atmosphere is created to a large extent through an absolutely magnificent musical score. Of the Big Finish plays I have heard, I think this one has the best music. It is a deeply mystical score, one that takes on into another world. It reminded a little of some of the work of the ambient group, Delerium. This score is included on the CD as a music only track.

Sadly, while the play has a lot of atmosphere it does not have an awful lot else to commend it.

It has been sometimes commented that it is unfortunate that Big Finish has seldom been able to recreate the TARDIS crew in the Davison era. With Janet Fielding, until recently unwilling to perform for Big Finish, a good deal of their Davison plays have been forced to use an hypothetical TARDIS crew of just the Doctor and Nyssa during the supposed gap between Time Flight and Arc of Infinity. This is not helped by the aging apparent in Davison's voice. He simply does not sound like he did when he was the Doctor. His performance has not particularly improved either.

Nyssa is as boring as she ever was. Making this worse, I found it at times difficult to distinguish her voice from that of the female Menoptera character. The Doctor and Nyssa riding Zarbis is a fun idea, but the supporting characters aren't terribly interesting. We have an outcast scientist/ politician type and his dutiful daughter.

On the other hand, Claire Wyatt is great as 'The Speaker For Mother Life.' She puts in a real urgency into her repeated decleration "I am the Speaker for Mother Life!" Its amazing what an actress can do just by repeating one single line.

We get to the conclusion in rather hurry. There is little conflict or narrative depth at work here. Its a story to enjoy for the atmosphere and the music, but not much else.
Posted by Matthew Celestine at 05:15