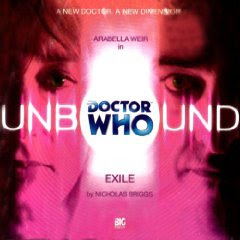 What if the Doctor regenerated into a woman to escape the Time Lords?

In a series of non-canonical, 'what if?' Dr Who stories, doing a script about a female Doctor is an obvious choice. The problem then comes as to what sort of story one would write about a female Doctor. Would she become a mother? If she had a relationship with a male character, would that be 'undoctorish,' seeing as the Doctor generally avoids that sort of thing. We might suppose that a female Doctor might adopt a different modus operandi, but how could that be shown in just one story? Sadly, Nicholas Briggs took the easy route and just wrote a gross-out comedy with lots of great laughs. Very funny, but one feels that something much more interesting could be done with a female Doctor. Still, it has a lovely pink CD case.

The story opens at the conclusion of the The War Games, with the condemnation of the War Lord. The Time Lords then find that the Doctor has escaped. Having regenerated into a woman, the Doctor then finds herself working in a supermarket and indulging in some rather heavy drinking at the weekends. A lot of the humour is a bit on the lavatorial side, one gets the impression that Briggs is aiming to make a serious point about the banality of the binge drinking culture. What is a bit disappointing is that very few of the jokes deal with the obvious subject of the Doctor being in a female body. Perhaps Briggs was concerned that jokes about women's bodies might not be appropriate if boys of the age I was when I became a fan are listening. This story would probably have been little different if the Doctor had been a just a newly regenerated male Doctor. He could just as easily have got a job in a supermarket and started binge drinking.

Call me politically correct if you like, but it has to be asked if there is something horrendously misogynistic about the idea that as soon as the Doctor becomes female s/he becomes a drunken loser. I suppose you could look at it the other way and consider that it is making a point about the underprivileged status of a lot of thirty-something single women who do turn to drink.

The affectionate parody of this story is mostly aimed at the Second and Third Doctor era. The inclusion of the War Lord's trial is quite nice and references to those dreaded Quarks are frequent. Exile also brings in the TV Comic's version of Season 6B with the inclusion of those freaky scarecrows that the Time Lords used to capture the Doctor. The theme music for this audio is based on Second Doctor era theme, but sounds rather more wobbly and scratchy.

Arabella Weir puts in a wonderful performance as the Doctor. Despite the comedy and the weird circumstances in which she is placed, she manages to come across as genuinely Doctorish. As with the mean, brutal Doctor in Full Fathom Five (who in that story came across as a bit of a moron, despite a brilliant performance by David Collings), one feels that one would like to see more this alternate Doctor in some rather more serious stories. Nicholas Briggs gives a good contrast by playing the voice of the previous Doctor.

The two Time Lords who hunt down the Doctor are hilarious, particularly the one played by David Tennant.

One of the other big let downs of this story was the ending. It really was a bit of a disappointment.
Posted by Matthew Celestine at 13:01