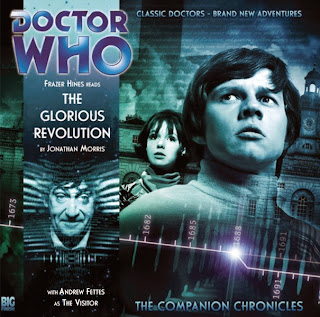 The Glorious Revolution of 1688 has always been a significant event for me. When I was a Protestant, I celebrated it. Now that I have converted to Catholicism, I regard the Glorious Revolution as a disaster. I do find it distressing though, that so many people are unaware of this event. The writer admits that before researching for the story, he had not heard of it, having not been taught about it at school. The Stuart dynasty used to be a staple part of the British history curriculum, but it seems that modern schools avoid the Stuarts. Popular culture seems more interested in the Tudors, presenting a sanitized image of the Elizabethan 'Golden Age,' ignoring all of the achievements of the Stuart era. Thankfully, Big Finish have paid tribute to this most fascinating era with this Companion Chronicle.

Jamie's background as a Jacobite had not really been explored prior to this audio. It was nice to see Jamie in a situation where he understood what was going on and was less of a fish out of water. Yet he soon gets into trouble and has his own Aztecs moment, attempting to change history. This is brought to us via Frazer Hines who is on top form. He not only reprises Jamie brilliantly, but gives an uncanny impression of Troughton. Frazer is assisted by Andrew Fettes, who plays too roles extremely well; the tortured and embittered James II/VII and the cynical civil servant-like Celestial Intervention Agent.

On the whole, I enjoyed this story and thought it was well done. It was great hear the Second Doctor dragging up again and disguising himself and Jamie as washer women. However, it does suffer from a problem with pacing and feels rather rushed. The interesting idea of a change in timelines is not really developed. More importantly, I felt Jamie was far too quick to accept that history could not be changed. There was no sense of conflict or discomfort in his betrayal of James II/VII.

According to this audio, Jamie lived a very happy and contented life Post-War Games (+ Season 6B). This definitely conflicts with what we saw in the comic strip, The World Shapers, but I doubt anybody will complain about that.

Posted by Matthew Celestine at 07:53