Planet of the Daleks 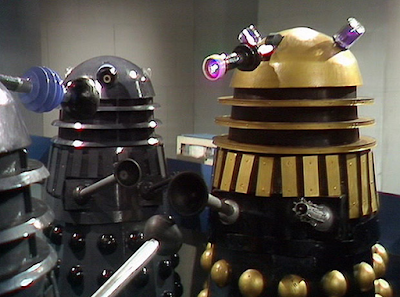 I watched the re-run of Planet of the Daleks on BBC1 in 1993. I was twelve years old at the time. I think at the time I was disappointed that it was not the original Dalek story. I was a huge Doctor Who fan at the time, but even then I found myself getting bore of the story as I watched the last two or three episodes. It just seemed so long and drawn out. This seems to challenge the argument(an argument I have sometimes used)that the overlong and padded stories can be more easily enjoyed and appreciated when watched over a course of weeks. Planet of the Daleks really is as padded out and tedious as any Doctor Who serial can get.

Planet of the Daleks is basically a re-working of The Daleks, with every one Terry Nation's favorite tropes thrown in for good measure. This is the ultimate cliched Dan Dare space adventure. Carnivorous plants, explosions and the inevitable virus.

Yet it does benefit from the superb direction of David Maloney, who was doing everything he can to make this a decent production. Admittedly, some of the effects are a bit weak, such as the Dalek army model shot. I don't think these detract too much overall from its overall visual strength.

Like so much of the Pertwee era, this story is colourful. I used to like the early gritty Season 7 Third Doctor material best. However, I have come to appreciate the colourful Glam Rock Third Doctor stories that don't really fit with the common perception of the Pertwee years as realistic TV action.

I love Phil Sandifer's essay on Planet of the Daleks. He does a great job of re-assessing it in a positive light. Sandifer points out that Nation does not quite get how to use the Third Doctor and so has him spending much of his time making speeches about the nature of courage:

"So Pertwee does not get to run around and be ostentatiously imperious as he prefers. Nor does he get to be ignored and occasionally tortured, as he's best at. Instead he stands around and gives speeches about the meaning of courage. Pertwee certainly isn't bad at this, but it's neither in his wheelhouse nor something he visibly enjoys."

Yet he argues that Pertwee finds the way to make this work:

"The solution he settles on, however, is perfect: he plays the story with a cool detachment. The result is a perfect postmodern commentary on the episode- as if the Doctor recognizes that he's in an unusually easy adventure of far less complexity than he routinely deals with, and that it does not actually require his full attention. The tendency to make speeches about fear instead of doing what are now the core elements of "Doctory" behaviour becomes not a mischaracterization but a case of the Doctor taking it easy and figuring he doesen't have to work, he can just sit back and encourage everybody else."

I think this is such a beautiful insight from Sandifer. I love the idea of Dr. Who having outgrown this sort of story.

By no means a great story, but I love the fab black and gold Dalek Supreme.

Posted by Matthew Celestine at 05:17