The Dalek Invasion of Earth 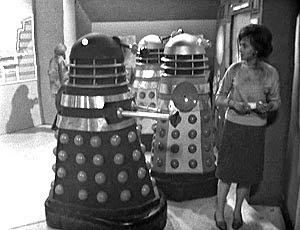 Despite its title, this serial concerns the Dalek occupation of Earth, rather than the Dalek invasion. In this, it strikes an original note, as there are plenty of films about flying saucer invasions, but very few films about what the flying saucer people do after they've turned up and knocked down the Statue of Liberty and burned down the White House.

There is a very effective sense of bleakness about Dalek Invasion. The characters find themselves in an utterly hostile, yet not unfamiliar environment, harassed at every turn by Robomen, Daleks, flying saucers, hungry dogs, collaborators, crocodiles and spivs. The scenes of a silent London remind me of the 80s Day of the Triffids series. Indeed, the scene where Barbara drives her truck into a group of Daleks is remarkably similar to a scene in Day of the Triffids, where a truck runs over a bunch of triffids. I actually found myself looking at the credits to see if David Maloney had any involvement.

There are two things that are not so effective. The long, lumbering plot with it's grab bag of Terry Nation action sequences and the rather weak direction of Richard Martin. In the rather unworldly atmosphere of the first Dalek serial, Richard Martin worked alright. However, he was much less adept at the more realistic action drama of this story. The fight scenes are simply terrible. This is a story that simply cries out for Douglas Camfield.

The final scene of the departure of Susan is moving, especially for me, as I am one of the few fans of Susan. However, it is hard not to feel Dr. Who's actions were a bit drastic and heavy handed.

The Daleks are perhaps less interesting than they were in the first Dalek sequel. They have become a generic space conquering race, the likes of which we would see rather a lot of in Doctor Who. The obvious difference from later Daleks, however, is their reliance on satellite dishes to move about in the open (in contrast to the city-bound Daleks of the first serial). Lawrence Miles and Tat Wood offer a good explanation for this, arguing that the more familiar space Daleks adapted a number of Skaro city Daleks to boost their forces.

What do we make of the Daleks bizarre plan to turn the Earth into a spaceship? When we considered Inferno, we connected that to that story to the theory that the planet Earth is constructed on a hole in the universe and that beneath lies an entrace into the hellish Yssgaroth universe. I pointed out that in Inferno, the Primord mutants appeared to be under some kind of psychic direction. The Yssgaroth vampires were trying to break out into this universe. I would suggest that something similar is happening in this story. The Daleks are being telepathically manipulated by the Yssgaroth into drilling into the Earth's core. Their Dalek minds are being fooled into thinking that they can turn the Earth into a spaceship, when actually they are breaking out a far more terrible enemy.


Posted by Matthew Celestine at 03:25