Mummy on the Orient Express 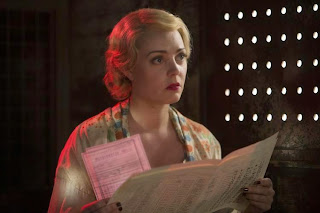 This story is set on a recreation of the Orient Express in space. It seems a remarkably vivid recreation, because both the crew and passengers are dressed in period costume. Furthermore, they are all human and seemingly British. I think it would have been more interesting visually to do a less perfect re-creation of the period, by having some characters be aliens and some of the passengers wearing non-period costumes. Would that have confused the costume department too much? If they really wanted to do a period drama on the Orient Express, why not have it set on the real train on Earth, with the monster being an Egyptian mummy? This seems a bit like RTD's demand for werewolves, Kung-Fu monks and Queen Victoria in the same story.

I'm not sure why the carriages of the train are swaying, as if on a winding railtrack. If this is a spaceship travelling through space, it ought to be moving straightforward, having no physical obstacles to affect its movement.

I don't think this is how to do a monster story. We get a full reveal of the monster right at the beginning. We see so much of it that it does not stay scary for very long. What is more, the very title gives away the fact that it is a mummy. Could the nature of the monstrous entity not have been concealed for a while? An unknown terror is much more frightening.

The mummy turns out to be a form of alien technology, like several other entities we have encountered in this season. Are we not going to get any proper aliens in these stories? It seems a mundane and dull explanation for the monster. I would much have preferred it to have turned out to be the mummified remains of some ancient alien emperor. This story shares with Pyramids of Mars a misunderstanding about just why mummies are scary. Mummies are not scary because they are wrapped in bandages. They are scary because they are dead things. They are part of the 'uncanny.' A robotic mummy is a bit banal.

I think this story was reasonably well polished and did interesting things with the characters, but it had a lack of imagination and flair.


Posted by Matthew Celestine at 08:04