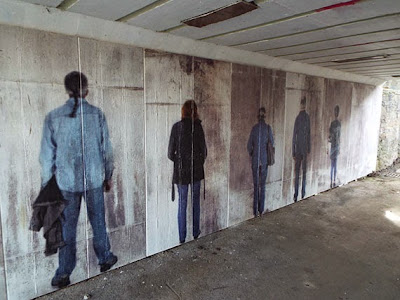 Most people seem to like this story, but I found myself getting really bored watching it. Flatline seemed to be full of lots of running around and pointless action.

The idea of non-3D aliens was an interesting one and had the potential to be genuinely creepy. Unfortunately this failed to terrify due to the comic tone taken by the script. Sometimes I just wish the writers could tone down the humour and try to give us a more serious story. We really don't need a laugh every minute. The story was also ruined by the awful music, the sort of score you get in those family movies they show on Christmas day.

In Flatline, Clara gets to take on the role of the Doctor. She turns out to be rather good at it. It was fun at times seeing her act Doctorish and her resourcefulness was appealing. However, I can't help thinking thst it would have been more interesting to see her do a bad job of being the Doctor. What is the point of watching Doctor Who if anyone can be the Doctor?

Once again, the Doctor suggests that a black man is unintelligent. This really reminds me of that Father Ted episode in which Father Ted accidentally acquires a reputation for being a racist.

I didn't feel at all engaged by this episode. Like so much of Moffat-era Doctor Who, this is just boring.
Posted by Matthew Celestine at 08:11