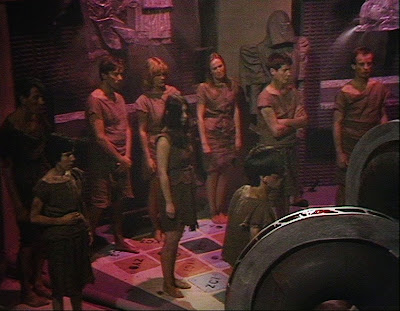 Underworld is one of the stories most hated and derided by Doctor Who fans. I'm not sure I hate Underworld personally, but I don't feel able to defend it. There is very little to like about this story.

The idea of the Time Lords as gods, intervening in a culture is interesting, though this idea is largely forgotten. The set of the Minyan spaceship is a great design, but this serves to reflect on how poor and cheap the 'alien city' set looks. We could regard the presence of cave people as a nod to An Unearthly Child.

The use of CSO to create cave scenes was a bold move. It is generally agreed that the results are disappointing, but I am confident that had they used corridors for these scenes, Underworld would have looked even cheaper and more underwhelming.

The performances do not help. The Minyan crew have been on a quest that has been unsuccessful for a thousand years. They should seem weary, perhaps bitter and possibly half-crazed. None of that comes across in the guest cast performances.

The intention of this story seems to be to create the sense of epic space fantasy, along the lines of Star Wars. To that intent, it borrows the myth of Jason and the Argonauts to try to create that mythic feel. Unfortunately, the borrowing feels so obvious that it feels rather false. There is no sense of the creation of any sense of fictional history, such as we get in Star Wars. The use of big science themes also seems to run counter to the intent. Star Wars had spaceships and robots, but it never dwelt on hard science themes, that would have distracted from its operatic grandeur. Underworld aspires to be great space fantasy epic, but in the end it is a dull and bland science fiction story.
Posted by Matthew Celestine at 05:16