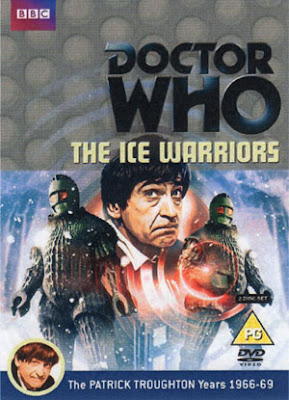 I really did not want to buy The Ice Warriors DVD. The Ice Warriors is a story that I find deathly dull. However, it occurred to me that if fans don't buy these DVD releases with animated reconstruction, we won't see any more of them. It would be nice to see The Crusade with animated reconstructions (though apparently Moonbase/ Underwater Menace is to be the last classic DVD release). So I bought the wretched DVD.

I did not find myself liking the story any more than last time I watched it. It was nice to see the missing episodes animated. The animation is simple, but highly effective and infinitely superior to the hasty linking sequences on the old VHS release. Yet the restoration of these episodes only served to show how slow and tedious this story is.

It is unfair to criticize some older Doctor Who stories for being too long, after all the original viewers didn't sit down to watch whole serials in one go. They watched the episodes week by week. The Web Planet and Dr Who and the Silurians have enough plot twists to keep one's interest despite their length. On the other hand, there is nothing in The Ice Warriors to justify its six episode length. It feels artificially drawn out.

This story is mostly loved for being the first appearance of the Ice Warriors themselves. Their costumes are very inspired, with the crocodile like armour, the make-up under the helmet and the curious tufts of hair sprouting from their joints. They are unfortunately quite slow and cumbersome, but there is some compensation in the skill with which the actors give them distinctive movements. The Ice Warriors are at their best here. They have more distinctive personalities, where in later stories they would be reduced to just heavies.

Victoria is incredibly annoying in this story. She spends much of it whimpering and crying. Jamie is a little bid underused for much of the proceedings. Dr. Who has some technical problems to solve, but I don't quite feel that he is as engaged in this story as he is in others. Of the guest characters, Leader Clent is perhaps the most interesting.

There has been much discussion about when this story is set. The Radio Times gave it a date of 3000 AD, but most fans seem to favour a date of 5000 AD, around the time of Magnus Greel. For me the decisive factor is that nobody recognizes the Ice Warriors. By 5000 AD, the Ice Warriors would become a major power within the Federation. While what we see here appears incompatible with the Doctor's description in The Mutants of the Earth as totally urbanized, this is not necessarily the case. We only see a small part of the Earth in this story. Perhaps more equatorial regions are totally covered in the huge urban hive that the Doctor described in that later story.

Posted by Matthew Celestine at 06:49