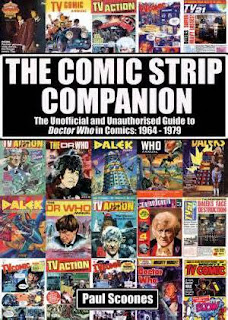 The Doctor Who comics, particularly the early comics, have often tended to be a bit neglected by fandom. Yet they are an important part of the history of the franchise and were of great importance to young fans in the era before Doctor Who novels and audios. I have tried to argue on this blog that they should be treated as equal to other media in their canonical value and John and Gillian should not be excluded from lists of Doctor Who companions.

The Comic Strip Companion provides a useful reference tool for the first phase of Doctor Who comics, that is those before the Doctor Who Weekly. This volume includes entries for all the Doctor Who TV Comic strips, the Countdown and TV Action strips, the World Distributors annual strips up to 1979, as well as the TV Century 21 Dalek strips and other strips in Terry Nation's various Dalek spin-off material. Sadly, the book includes no reproductions of strips.

It follows the pattern of so many episode guides, giving a synopsis of each story, as well as continuity details and goofs as well as a critique. Information about these stories can be found online, however, Scoones offers much more detail than has previously been available. What particularly stands out is the wealth of historiographical materail that Scoones collects, providing a clear picture of the publication history of the comics. Regarding the critiques, it can be tedious reading the author's continual laments about the quality of the strips, particularly the Sixties TV Comic strips. I might have liked him to show a little more enthusiasm for his chosen subject matter. On the other hand, I would have liked to have seen some acknowledgement of the racial stereotyping that can be seen in the TV Century 21 Dalek strips (Power Play and Menance of the Monstrons).

The author makes the assumption that the comics are set in an alternate universe and therefore makes no attempt to reconcile them with Doctor Who television continuity. I was very dissappointed and consider the alternate universe view a rather lazy assumption. To my mind, a major appeal to the comics is the idea that the Doctor had more adventures than can be seen on television. It would have been so much more interesting had the author attempted to suggest ways to fit these stories in to the wider Doctor Who mythos.

This is definitely a useful book for fans to buy, but it is not the comic companion I would have liked to have read.

Posted by Matthew Celestine at 03:03