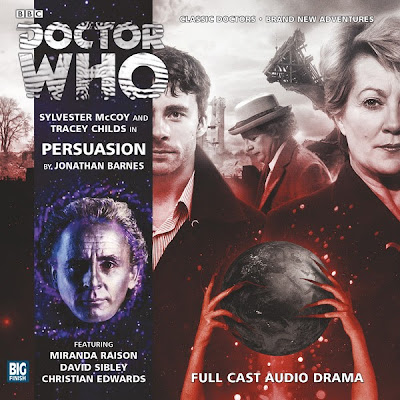 For the first time we get a Klein story that is a bit disappointing. Not that this is Tracey Childs' fault; as usual her superb acting range shines through this story. It is still wonderful to have another Klein fix (and this is the first of a trilogy of new Klein stories as well!). I complained in my review of UNIT Dominion that Klein needs to get out of her laboratory a bit more. The writer had obviously read my review, because she was given a scene in a bar, where she sips a white wine and soda. This is in the context of trying to be a considerate and approachable boss to her subordinate, Will Arrowsmith. The decision to introduce a new character for Klein to interact with was a sensible one from a character development point of view, though oddly, the pair are separated for much of the story. Despite the positive signals of continued development for Klein, this audio does little with her, leaving her to simply complain about Dr. Who not telling her anything, like so many other companions. I disagree with reviewers who say she has become a generic companion in Persuasion, but it is not material that complements the character.

So, Will Arrowsmith? What does the cover suggest to you? A character who is rugged, easy-going and sexy? A character who is smart, if perhaps a little out of his depth, like most companions? Clearly a contrasting character to Klein; one expects she will find him exasperating, but admit grudgingly that he is useful to have around. The character that we actually get in the audio, voiced by Christian Edwards, is the most appalling and cliched caricature of a nerd ever. I found it impossible to imagine the character voiced by Edwards looking like the chap on the cover. My mental image was something of a cross between Billy Bunter and Herbert in Timelash. It was a really big mistake to give the character such a silly voice. We ought to be be able to feel for Will. We can laugh at his inadequacies, but this laughter should feel painful, knowing he reflects ourselves. Instead, we are encouraged to ridicule the man. The character needed to be played straight, or at least straighter (not necessarily in a sexual sense!) It's a real failure of direction.

The story itself is a bit uninspiring, with a rather meandering plot. Ostensibly, it is set at the end of World War Two, but this setting plays no real role in the plot, other than offering some Nazi characters who don't really show much ideology. It could have been set in any historical period. It also suffers from an unevenness of tone. The sections with the alien god-like beings are grandiose and ethereal, while the sections with alien races doing battle has a comic satirical tone that jars with the rest of the material. One can only hope that the next two stories in this trilogy show some improvement. Personally, I'm not sure we needed a trilogy like this for Klein. We got an awful lot of grandiose cosmic drama in previous Klein stories. What we need with Klein is a more low-key, more incidental story. That would probably do more for Klein as a companion than another big story arc.

On the positive side, it was a good idea to have the alien gods speaking in Shakespearean poetry was a great idea and sounds beautifully haunting. It really makes them stand out for other run-of-the-mill Space Gods. There is also a lovely reference to Quatermass.

According to this story, Klein's parents moved to Britain after the Second World War. I had been pretty sure, based on Colditz, that Klein's parents had emigrated before the war. I suppose this could be a result of the re-writing of her history. It might allow her to be a bit younger than she would be had she been born in say, 1935 (a detail I created for my fan fiction).

Posted by Matthew Celestine at 11:45