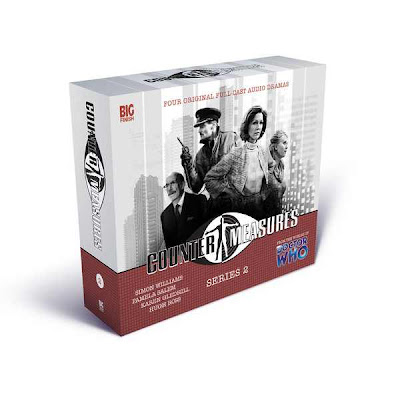 There are some signs that Big Finish have raised their game with Counter-Measures Series 2. There is more humour, which is welcome, though I might have liked to have seen some more. The quality of the story writing and plotting has also vastly improved since Series 1. We also get some brilliant guest performances, most notably Celia Imrie, who is given much more chance to shine than she was in The Bells of St. Johns.

There are echoes of Quatermass, particularly in the sense that society is just a step away from descent into madness and savagery, but the Quatermass influence is less literal here than in series 1. This is reflected in the theme matter; there is a complete absence of aliens and non-human monsters in this series. This creates a stronger sense of realism; this is set in a world closer to our own than that which we are used to seeing in Doctor Who. Yet I did find myself missing aliens and monsters. It would have been nice to have at least one story with aliens or monsters in.

If you thought Sir Toby Kinsella was a bit Machiavellian, you will be amazed to find him paired with another scheming civil servant, Templeton, played by Philip Pope. Templeton and Sr Toby have a beautifully vicious rivalry. Somebody on the bonus documentary made a lovely, but surprising comparison with the Frasier brothers. These two characters are fun to listen to because they are so similar, yet subtly different. Sir Toby himself gets an awful lot of character development in series 2. While we don't ever see quite what makes him tick, we find out just what a tantalisingly complex character he is.

Group Captain Gilmour gets a lot of attention in Manhunt, which is very much his story. Yet series 2 does not resolve one of the fundamental problems with the Counter-Measures set-up, which is the redundancy of Gimour's character. Gilmour was basically created to be a substitute for the Brigadier. Thus, his whole purpose was to be the leader of a military operation. Counter-Measures is not UNIT, however, and so Gilmour is deprived of his natural role as a military leader and is reduced to being just an heavy or an odd job man. This role might suit a junior officer, but seems very out of place for a senior officer. An RAF group captain is the equivalent of a colonel in the army.

Alison Williams suffered an awful lot of trauma in the previous series, having been forced to shoot her fiance. She spends most of this series doing an awful lot of moping, which gets tedious. She also ends up shooting somebody again, which runs the risk of creating a new trope. I know I keep on about accents a lot, but Karen Gledhill really needs to learn or re-learn Received Pronunciation. She simply does not sound like a well spoken girl from the Sixties. I find it incredible how so many actors today seem unable to speak in RP. Professor Rachel Jensen is given absolutely no character development in this series. Still, it is enough just to hear Pamela Salem's lovely voice again.


All of these stories have very downbeat endings. There is a very dark tone to the series. I can't help feeling that I would like to hear a few stories with a bit more of a lighter tone. There is a bit more humour in this series, but I still think we could do with some more. I'd also like to hear a few more references to Doctor Who in Counter-Measures. It is Doctor Who fans who are listening to this and we deserve to be rewarded.