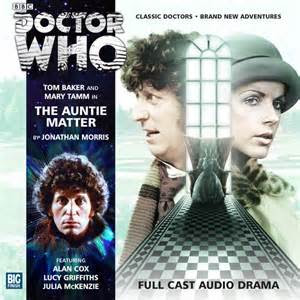 The pleasure of hearing Mary Tamm reunited with Tom Baker for this audio drama was tinged with the sadness of her recent passing. I really loved Mary Tamm's Romana who was a pleasure to watch in every moment of her stories.

As a pastiche of the work of PG Wodehouse, this story is very good fun. It has all the elements that made those works great; light-headed young men, country houses, wily butlers and menacing aunts. Yet as a Doctor Who story it is not that interesting. It's plot is predictable and unoriginal. The idea of an alien villain stealing human bodies to prolong her life has been done rather a few times before.

I didn't feel very inspired by Tom Baker's performance. I didn't feel the crazed eccentricity for which his television performances are remembered. This may be down to the fact that he is not given any memorable dialogue. It seems to be Reginald that got the best lines in the story. As the Doctor and Romana are split up for most of the story, we end up mostly missing out on what was best about their team, their interaction.

I really hate to complain about the late Mary Tamm, but what happened to her accent? She used more Estuary vowel sounds in this than a BBC news reader. The state of the Received Pronunciation is in a really bad shape when the poshest companion no longer sounds posh.

It's a fun story that is worth a listen, but don't expect too much. But the choice of title was great.

Posted by Matthew Celestine at 09:40