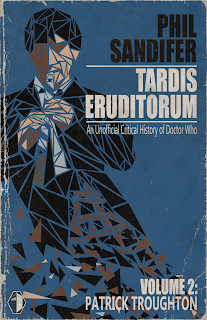 I hope you have enjoyed reading Dr. Phil Sandifer's fascinating Doctor Who blog, because I certainly have. When it comes to buying his second volume on the Troughton era, the question is, why buy the book when you can read the blog for free? As with the previous volume, there is plenty of extra material to justify the purchase. Sandifer offers essays on several spin-off products that are not covered on the blog, such as Baxter's Wheel of Ice. He also provides bonus essays on topics such as UNIT dating and the unfortunate presence of mute black strong men in some stories.

The Troughton era is not my favorite period in the history of the show. I like Season 4 and find some of Season 6 fun, but I find Season 5 monotonous. As ever with Sandifer, sometimes I agree with him and sometimes I disagree with him. Thankfully, this we haven't got to the Thatcher era in the books yet, so his left-wing politics come across as a little less obnoxious than they have been on the blog.

A key paradigm in Sandifer's discussion of the Second Doctor is the notion of his 'Mercuriality,' that is his connection with the mystical properties of metals within the alchemical tradition. This concept is vital in making sense of The Wheel in Space.

As regards the last true Doctor Who historical (leaving aside Black Orchid, which is barely an historical), Sandifer argues that the story is primarily about convincing viewers that the Hartnell era was over and the new regime was going to be a lot more fun. The Highlanders is thus a wicked send-up of the Spooner historicals. I was pleased to see that Sandifer has some positive things to say about the undeservedly despised Underwater Menace. On Moonbase, he argues that this story is about the Doctor facing up to the evil that destroyed his previous incarnation.

Sandifer seems unable to praise Evil of the Daleks highly enough. I'm not sure I agree with his assesment. This story feels somewhat overlong and tedious to me. Given the absence of so many episodes, I'd rather reserve judgment on it. He argues that this was the first Steampunk story. If so, it deserves a lot of blame for originating this tedious and overused genre.

Sandifer is negative in his assessment of Tomb of the Cybermen. I have praised that story myself, but I have largely come to agree with his view of it. His essay on that story is preceded by an interesting piece on race in Troughton era Doctor Who. A lot of readers may feel that he is a little too forgiving toward Evil of the Daleks and Web of Fear, despite their use of racial stereotypes. He is uncomfortable, however, with The Abominable Snowman on account of its Orientalism.

As with Evil of the Daleks, Sandifer cannot stop praising The Enemy of the World. He makes some strong points that incline me to be favorable to it, though it's hard to evaluate a lost story like this one. He looks at The Web of Fear primarily in terms of its role in shaping fan expectations of what Doctor Who should be about.

Sandifer is very harsh in his criticism of The Dominators, which he views as an 'attack on the ethical foundations of Doctor Who.' I was disappointed because I rather like that story. I don't know what that says about me. His next essay on The Mind Robber is quite fascinating. He offers the remarkable theory that the Doctor is from the Land of Fiction and its creators are his own people. I don't find this theory altogether convincing and it seems a distraction from the fact that The Mind Robber is poorly conceived and tedious story. His take on The War Games is particularly fascinating. He views it as a kind of narrative critique of the entire Troughton era, which makes it an appropriate conclusion to that period of the show.

On the Season 6B question, he is rather dismissive of the idea, viewing it as an example of ludicrous continuity obsession. May he be forgiven. He also unfortunately favours dating the UNIT stories to the period when they were broadcast.

I don't think one can argue with his assertion that Prison in Space was a piece of appalling sexism that should never have been revisited by Big Finish.

I would highly recommend TARDIS Eruditorum vol.2 to all Doctor Who fans. You won't agree with everything, but it's all insightful stuff.

Posted by Matthew Celestine at 13:46