The Rings of Akhaten 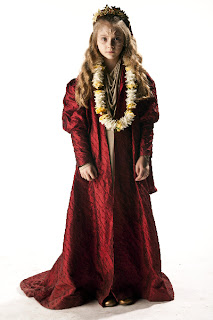 The Rings of Akhaten was as flawed and problematic as any Moffat-Who story, yet I found myself enjoying this episode. It seems like such a long time since I have actually felt any enjoyment in watching Nu-Who.

The episode unfortunately begins with an horrible intro in which Dr. Who is spying on Clara's parents. I'm really bothered by the this development of the Doctor as a stalker. This seems to be one of the worst examples of Moffat's sexism.

Nevertheless, things pick up when we actually go to an alien planet, populated by aliens, with no humans around. This is something that was really badly needed. It is remarkable that so many Nu-Who stories, even under RTD, were set on Earth despite the fact that the TARDIS can go anywhere in the universe. We have seen so little of Dr. Who actually exploring and when we have met future humans, they have tended to dress and act like Twenty-first century British people. Of course, in this episode Dr. Who acts like a cosmic know-it-all as usual, but at least he was showing us something alien.

The Rings of Akhaten was a visual feast, with so many alien creatures and fantastic special effects. While I usually complain about the Murray-Gold music, here it was used to good effect and the role of the singing created a genuinely magical feel. This was a vast improvement on A Christmas Carol, where the musical element seemed tagged on artificially.

Plot-wise, it was a different story, with an unsatisfying resolution, a lack of clear explanation and a lot of sonic screwdriver waving. I suppose that was hardly a surprise, but it did not detract from my genuine enjoyment of the lavish visual and musical elements.

We don't get any real character development for Clara. All we learn about her is that she had a mother who loved her and who died. But were we expecting any?

It was nice to get a reference to Susan.

I'm surprised that this episode has gone down so badly with so many viewers. I thought it was a lot stronger and more enjoyable than the previous episode.


Posted by Matthew Celestine at 06:07