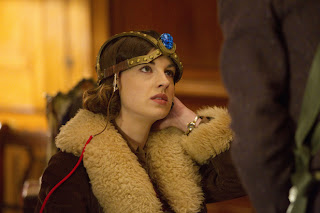 I can't believe so many reviewers think this story was scary. Matt Smith and Jenna-Louise Coleman really don't do scared acting very well together. This was rather more Scooby Doo than The Woman in Black. It did not help much that it was broadcast on a sunny spring day and not a dark autumn evening. I am sure the BBC has a reason for broadcasting Doctor Who at this time of year, but it's terrible for creating any sense of atmosphere.

I don't actually think Doctor Who can do a ghost story that is convincingly scary. For the reason that the viewer knows that any ghosts will turn out to be aliens. Ghosts are scary because they are supposedly dead things, they are part of the spirit world; the uncanny. An alien that appears to be a ghost is just banal. When we watch Doctor Who trying to do this genre, we have no need to fear the uncanny and undead because such things don't generally play a part in Doctor Who.

This story has gained a lot of positive reviews and I understand why. It's a story with some depth of characterisation and emotional complexity. There were some very interesting moments such as Clara's reaction to Dr. Who's voyage across time and her interaction with the TARDIS. But I still find it hard to look past the fact that it is an attempt to do a Doctor Who ghost story and unsurprisingly fails at this.

Two elements in particular suffered badly from lack of development. The revelation that the monster was in love did not arise from the plot and felt like it had been tagged on unnecessarily. The beast would have been more effectively left mysterious. Secondly, Hila Tacarian was very underused, quite visibly left standing around towards the end. There was little elaboration on where she had come from or what she would do now that she was stranded in another time.

I think I'm the only person in the world who liked The Rings of Akhaten more than this (my least disliked of this series so far).

Posted by Matthew Celestine at 08:10