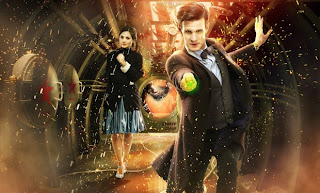 How do you reintroduce an old monster to the new series? You stick one of them in an isolated base. Chain it up as an helpless captive, only to have it escape. Make it so badass that it is unstoppable. Have it open up its armour so that we can all see what it looks like inside. Have it poised to destroy the world, but then have the female companion show compassion towards it and talk it out of killing everybody. That was how the Daleks were reintroduced and Cold War follows exactly the same format. It doesn't exactly feel fresh or original.

The real problem with this story is its utter predictability. You stick an Ice Warrior on a nuclear submarine and you know exactly what is going to happen right from the beginning. The Ice Warrior will try to use the missiles to blow up the world, but will be talked out of it, probably by Dr. Who's female companion.

It does not help that the character's are not terribly interesting. We have the sympathetic captain and the paranoid and bellicose lietenant (in other stories these two character tropes can be switched around). The professor is a rather problematic character. Is he a zoologist? If so, what is he doing on a nuclear submarine? His liking for 80s pop seems designed to anchor the episode to that period in the perception of viewer, but feels very lacking in authenticity. A Soviet nuclear submarine would have it's crew closely monitored for subversive politics. The professor would not have dared to flout such an interest. If he did have a western music with him, I suspect he would be less likely to be listening to the latest chart pop and more likely to be listening to older music like the Beatles. Worst of all, we have the sailor who decides to disobey orders and thaw out the Ice Warrior for no obvious reason.

There has been a lot of debate about whether the cast should have attempted Russian accents. I think that I am more on the side of the viewers who felt they should. The submarine crew did not feel very Russian at all. Sometimes viewers need a bit of help with these things.

Having the Ice Warrior leave its armour was rather interesting and an original idea. However, it seems odd that the species would develop a remote control device for the armour when they ordinarily never get out of it. It also seemed a little gratuitous and underwhelming to show a full view of the creature's face.

Clara's personality continues to slowly develop, but she is not terribly interesting. She still feels very much like a generic, scared but plucky companion, just like Sarah Jane Smith.

One last thing, the Doctor looks totally wrong wearing sunglasses. He looks very Matt Smith in them, but not very Doctorish at all. It was almost as bad as Pertwee in a t-shirt.

Posted by Matthew Celestine at 06:31