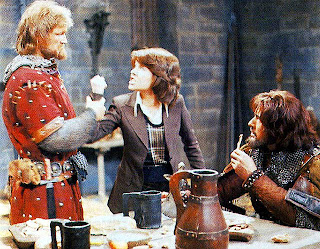 "Why don't you take off that ridiculous gear and go home to your butcher's shop!"


I watched this story on VHS in 1991 when I was ten years old. I think it might have been a birthday present. It was a story I was very keen to see back then and I enjoyed it a lot. When I bought the DVD, I expected to be a good deal less impressed and to find lots of faults with it (after all this a Pertwee/ Letts story!). Nevertheless, I was surprised to find myself enjoying it as much, if not more than I did aged ten.

It is this story which pretty much chrystalizes the pseudo-historical genre. It is perhaps unfortunate that this kind of story has become thought of as almost the default mode for Doctor Who (hence that dull runaround, The Visitation), yet here most of the elements involved work well. The story has something of a theatrical feel and though this is at odds with what the show often tries to do, this adds enormously to the charm and effectiveness of this serial.

What is most delightful about The Time Warrior is Robert Holmes' glorious script. Watching it, one feels as though every single line is priceless and more than half of them get a laugh out of me. Even more importantly, Holmes gives us a great cast of characters.

Linx, our first introduction to the Sontarans is also the best appearance of that race that we have seen in Doctor Who. Not only is his mask brilliantly realized, but Kevin Lindsay creates this character masterfully, offering not only a great vocal performance, but a real sense of an alien physiology in the way he moves. He is also, as some people have pointed out, a counterpart to the Pertwee Doctor, being stranded on Earth and acting as a scientific adviser to a bunch of soldiers.

Linx is made even more interesting by the fact that he is given an human counterpart in Irongron. Though Linx is an alien and Irongron is an Earthman, they are remarkably similar characters in their relish for military glory. Notice how their behaviour mirrors each other at the beginning of the story. When Irongron sees the 'falling star' he claims it as 'Irongron's Star.' When Linx steps out of his spacecraft, he claims planet Earth for the Sontaran empire. Every single scene shared by Irongron and Linx is a joy to watch. Their is such a beautiful chemistry between the two contrasting, but not dissimilar characters. As much as they may hurl insults at each other and desire the other's death, I am quite convinced that they both have a fondness for each other deep down.

Other characters are enjoyable too. Just watch how Blood Axe adores his captain! June Brown as Lady Eleanor is pleasantly Shakespearean in her performance. Rubeish is a little silly, but still fun. I don't know why Alan Rowe gets criticized in a lot of fan reviews for his performance as Sir Edward. The character he is playing is supposed to be rather pathetic and this comes across.

The Time Warrior is notable for the first appearance of Sarah Jane Smith, generally considered the most popular of companions among fans. Her portrayal is somewhat problematic, as Phil Sandifer argues on TARDIS Eruditorum. The presence of a feminist companion results in the Doctor becoming rather more sexist and patronizing than he was before. Sarah also comes across as remarkably stupid. Why on Earth does she conclude that Dr. Who is a spy? She sees him in conversation with the Brigadier, so it should be obvious to her that he is in a position of trust with the Brigadier. Spies generally try to be inconspicuous, yet the Doctor has a police box with him and flaunts bizarre gadgetry for everyone to see. There is an horrible sense that the viewer is being made to laugh at the stupid trendy modern girl.

There are other flaws to this story, most obviously the padded plot. The robot subplot feels unnecessary, as does the need for a final return trip to Irongron's castle. As with a lot of Doctor Who stories, there are a fair few holes in the plot. Some of these can be explained. I quite like the suggestion of Tat Wood in About Time that Sarah Jane Smith is working for UNIT as an investigator. This would explain how she breaches security so easily.

Linx's comment about Sarah's thorax was rather an eye opener for me when I watched this aged ten. Prior to this I had never noticed the different construction of the female thorax. Doctor Who can be educational!

The Time Warrior is simply one of the most enjoyable Doctor Who stories of the Seventies and one of the best of the Pertwee/ Letts era.


Posted by Matthew Celestine at 04:34