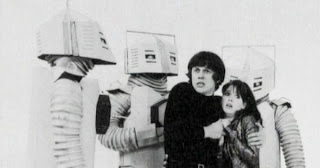 On paper, The Mind Robber sounds like a really fascinating concept. The idea of being turned into fiction is a remarkably ingenious existential terror. Yet I find The Mind Robber incredibly tedious to watch. It is very much one of those Doctor Who stories that is dearly loved by fans, but which is actually a bit rubbish.

The first episode was hastily written and tacked on. This is very much in evidence, as the episode does not gel neatly with the tone and plot of the other episodes. This episode has a surreal nightmarish quality that earns a lot of praise, but which does not disguise the fact that the story is not going anywhere. It is like Edge of Destruction without Hartnell and Hill to carry the story. The problem with nightmare sequences like this is that we know they are not real; they can never really engage the viewer. A child watching the apparent destruction of the TARDIS might be upset, but an intelligent older viewer can be pretty sure that this is just an illusion.

Things get worse in the next episodes, as the TARDIS crew meet one bizarre peril after another- tin soldiers, being turned into a cardboard cut-out and mythical monsters. This rapidly becomes tedious, as there is no sense of narrative or plot development to it, but just a string of weird events, one after the other. I find it hard to understand how fans can enjoy repeat viewings of these episodes. Why care about a monster that does not exist and which disappears when you stop believing in it? These episodes go nowhere and the attempt at resolution proves unsatisfactory when it comes.

To be far to all involved, this was a production in which almost nothing went right and which was beset with problems. Despite these problems, all of the cast seem to be approaching the story with a sense of enthusiasm and fun. This is the spirit of Doctor Who, but it is still a rubbish story. It is also hard to overlook some of the shoddy design elements too, such as the naff Minotaur and the model shot of the forest that does not match the set.

It's a pleasure to watch Bernard Horsfall (I note sadly his recent passing away). As somebody who was born in Nottingham, I appreciated his attempt at the accent, even if he did not get it quite right. Rapunzel is really cute, but I get so annoyed when I hear her say she is a 'princess.' Rapunzel was not a princess! Did Peter Ling never read any fairy tales?

It is refreshing to have a Troughton story without an alien invasion, a returning monster or a base under siege. The Mind Robber was an attempt to do something genuinely different, but it's a story that fails badly in this and bores me to tears.

Posted by Matthew Celestine at 07:35