Remembrance of the Daleks, by Ben Aaronovitch (Target novelisation) 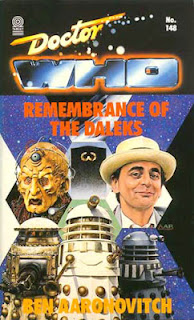 I read the novelisation of Remembrance of the Daleks when I was a nine-year old fan, new to Doctor Who. Having avoided Doctor Who when it was on television, this was my first experience of the Seventh Doctor and Ace. I did not fully appreciate them, as I found this novel very difficult and hard going. As a young fan, I preferred Target novels written By Terrance Dicks. They were so much easier to read than the more ambitious novelisations. Yet as an older reader, I find myself very much appreciating and enjoying the bold and creative style of the Remembrance of the Daleks novel. Its prose is very creative, particularly in those sections that attempt to write from a Dalek's perspective.

Remembrance of the Daleks adds to the original serial by fleshing out a lot of the characters and giving background. In some cases it's not altogether necessary, but it is interesting to get a more direct perspective from the writer. It's also interesting to read this having listened to the Counter-Measures audios that pick up on these characters and some of the details given in the novel. While the book has some sections set in ancient Gallifrey featuring Rassilon and Omega, we don't actually get that much more information about those events than we are told in the serial.

Prior to the Counter-Measures series, Rachel Jensen had been given two different post-Remembrance destinies. According to Who Killed Kennedy, she definitely retired in accordance with her stated intention in the script. However, in Millennial Rites, we are told she became scientific adviser to the Cabinet and was instrumental in the establishment of UNIT. My preference is for the latter version, Jensen does seem to be a bit young to be thinking about retiring. The novelisation, however, has her retiring and also implies that she marries Gilmore. So far Counter-Measures have not gone in that direction. It is also revealed that Jensen had a romance with Gilmore. Maybe I missed it, but I did not see any hint of that in Counter-Measures. To be honest, the whole idea of a romance between Jensen and Gilmore feels just too mundane and uninteresting. It feels disconcerting to read about it in the novel simply because there is no hint of it in the serial. Just watch Remembrance and try to imagine Gilmore and Jensen having a past history and feelings for each other. It just does not work.

The novel does a great job with Ace, showing the anger in her system over the racist attack on Manisha. I was late coming to the televised Seventh Doctor adventures and so my initial experiences of Ace were through this novel and the New Adventures. As a result of this, I viewed Ace as a very angry, angsty character. When I finally got round to seeing Seasons 25 and 26, I was rather surprised at the much milder, very children's television style Ace that was broadcast.

Remembrance of the Daleks is my favorite Doctor Who story and I think its novelisation is a worthy adaptation of it.

Posted by Matthew Celestine at 03:50