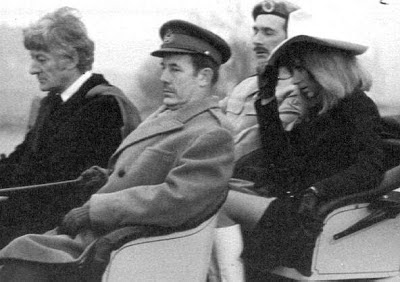 Ambassadors of Death is not the most highly regarded stories of the Pertwee era. It is not among the most well remembered stories of this period and is often considered to be the weakest story of Season 7. This is a real shame, as it seems to me to be among the best Pertwee serials (a short list in my opinion) and is a strong rival to Dr Who and the Silurians as the best story of Season 7.

What is so striking about Ambassadors of Death is how unlike typical Doctor Who this story feels. This story keeps its science fiction elements to the barest minimum possible since the era of Pure Historicals. We get only fleeting glimpses of the alien race and their spaceship. Instead of such fantastic trappings, the serial focuses on the more gritty and realistic elements of a near future society. This is a story foremost about brutal thugs, corpses being buried in quarries, paranoid generals and a space program that seemed realistic at the time. There is something very odd about watching the gun battle between UNIT and Carrington's goons- it feels like a different show with nothing to do with Doctor Who. This is the basic premise of Earthbound Season 7 taken up to the maximum level.

The influence of James Bond is apparent, with the presence of a multitude of gadgets, endless fights and escapes. Yet the serial strives to be much more than just Doctor Who doing James Bond. This is a story about the dangers of paranoia, xenophobia and militarism. But more than this, Ambassadors of Death is a story about the nature of space exploration. The influence of The Quatermass Experiment will be apparent to the educated viewer. The serial borrows many visual elements of Quatermass, such as the empty spacecraft and the sense of the mysterious otherness of the cosmos beyond our planet. Yet Ambassadors does not subscribe to the Quatermass view that outer space if a realm of of abject terror. The story offers the hope of peace between different planets. Nevertheless, Ambassadors portrays outer space as a realm of mystery beyond human comprehension. Ambassadors raises the question of whether humanity is ready or able to deal with that world of mystery. The trauma and mental breakdown of Carrington suggests the conclusion that humanity is too petty and small in its concerns to face the beauty and magnificent wonder of space.

This is a story on an epic scale, taking us from a futuristic space centre to country roads and even to the vastness of space. It has production values that match this sense of scale. Watching it, I am struck at just how well everything is realised visually, even with the unfortunate continuity errors like Liz's hair-length and choice of tights. This is a story with plenty to look at and it does not let us down. With the addition of Havoc to the team, we get some wonderfully well orchestrated fights.

Ambassadors offers us some fantastic guest performances. Ronal Allen is memorable as the controller, Ralph Cornish. In a much smaller role, Michael Wisher, the future Davros, is astounding as the news correspondent. There is a beautiful intensity to his delivery of every line. John Abineri also gives a really subtle performance as General Carrington. Doctor Who has plenty of crazy villains, but Carrington is one who has clearly suffered a deep psychological scarring, and this comes across in his performance.

It is Reegan, however, who steals the show and becomes the most memorable hired thug in the history of Doctor Who. What is shocking about Reegan is the sheer casualness to the way he kills people. Unlike other Doctor Who toughs, he does not get angry and point guns at people. He is absolutely in control of every situation, even when he is finally dragged away. He has no big ambitions like taking over the world; he just wants to exploit the situation and make money. Just look at his excitement at the thought that he can break into banks at leisure- he looks like a child in a toy shop! The novelisation gives him a fitting background; he was an IRA terrorist who helped himself to the funds.

Pertwee seems a lot more settled into his role in this story than in the previous two serials. He plays it absolutely straight and it comes off well. I am not a fan of Pertwee's Doctor and he is obnoxious in quite a few places, such as his rudeness to Cornish. Caroline John's Liz gets a few good moments, but as with other stories, her character is horribly underused. She is mostly there to get captured and to escape.

Ambassadors of Death is by no means perfect. While the fights are great, I think it could have done with a lower body count. Doctor Who should not trivialize the death of characters, as it too often does. The story is a bit padded and probably became wearying over the weeks. The motives of Tatalian are also a bit unclear. I don't think this is the best story of Season 7, in my opinion Dr Who and the Silurians has a stronger plot. I do think, however, that it is better than the rather overrated Inferno. Compared to this serial, Inferno feels hopelessly like a standard Doctor Who story with green slime and a monster of the week.

Posted by Matthew Celestine at 03:45