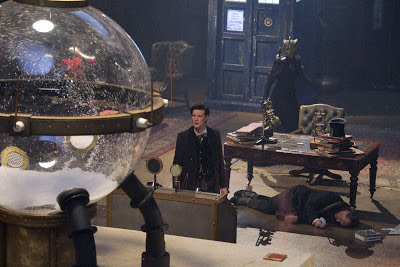 
Watching The Snowmen made me realize what a shallow Doctor Who fan I am. After watching most of the story with distaste, I suddenly got excited when I found out that the Great Intelligence was back. Of course, it is difficult to see how this story fits in with the continuity for The Abominable Snowmen, but I'm sure there is solution if you have time to think of one.

Reading other reviews, it seems that The Snowmen has gone down very well and I've seen little criticism of it voiced. I may well find myself being a lonely voice in saying I couldn't stand it.

Clara, played by Jenna-Louise Coleman looks set to be the most annoying companion ever. I hated every minute of her onscreen presence. I can't see why other reviewers seem to like her. In the role of both Victorian governess and tavern wench, Coleman is utterly unconvincing. She is just playing on overdone cliches. She is a walking Victorian trope for a theme park version of the Victorian era. Added to this, Clara is even more poorly characterised than other Moffat characters. A posh governess who moonlights as a low-life barmaid? Why? Once again, it looks like we are going to get a big mystery story arc about Clara's identity. Didn't we have enough of that with River Song?

Likewise, Dr Simeon, the human villain has no real identifiable motivation. He was just lonely and unhappy as a child, so he aided an evil alien entity. Richard E Grant's performance is as dull as his voice acting was in Scream of the Shalka. He acts very cold and menacing, but he brings no subtlety or depth to the character. Thankfully, Ian McKellan's vocal performance as the Great Intelligence is a good deal better.

The monstrous snowmen looked alright, if a little cartoonish, but their concept seemed a little too similar to the Weeping Angels and the Silence. This only adds to the sense that this story is a collection of Moffat set-pieces.

The Snowmen also sees the return of Vastra and Jenny, along with Strax the friendly Sontaran. I don't like any of these characters. They feel contrived and none has been given a strong enough background for them to make any real sense within Doctor Who continuity. I didn't care for the topical bombshell of gay marriage being dropped into this story either. That was really not necessary.

I'm getting a bit tired of the routine of the Doctor becoming cold, uncaring and reclusive following the departure of a companion. It's getting tedious and seems to throw out the development of the Doctor's character over the course of the show. In any case, this attempt to give the story a dark and angsty edge is rather undermined by the excessive and rather overdone humour of the story. If Moffat wanted to give us serious drama, he really should have trimmed away some of the gags here.

I mentioned earlier my childish thrill at the return of the Great Intelligence. One can't help feeling reminded of the return of old baddies like Omega and the Sea Devils in the 80s. With its re-use of characters, its heavy exposition and heavy reliance on previous stories, The Snowmen is very much reminiscent of the continuity-obsessed excesses of 80s Doctor Who.

I'll admit that this story is a good deal better than the last two Christmas specials, yet that is hardly good ground to build on. I don't hold out any hope for much improvement in the next season.

Posted by Matthew Celestine at 12:44