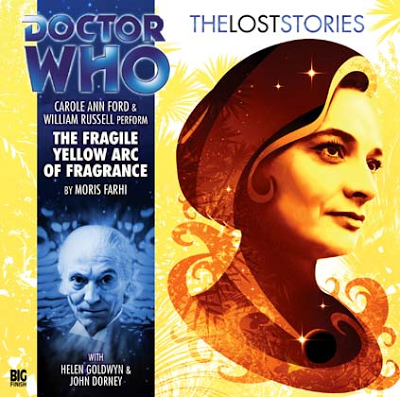 The Fragile Yellow Arc of Fragrance is the second story in the Big Finish First Doctor box set. It is an unused story that has been adapted as a talking book by Nigel Robinson. It is narrated by Carole Ann Ford, with additional voice acting by John Dorney and Helen Goldwyn.

Don't you just love that title, The Fragile Yellow Arc of Fragrance? It sounds so beautiful, so elegant and rather mystical. It's a title that really captures the feel of the story. This is definitely a story about beauty, about love, but it is a story with a gentle sadness and a sense of tragedy to it. It is simply plotted, but it is both effectively realized and imaginatively conceived.

This story is a good deal shorter than most Doctor Who stories. It also has a strikingly different narrative structure to other stories at the time. While other First Doctor stories have the TARDIS crew exploring a new world at the beginning, this story is set after the crew have already got to know the new world and are thinking of leaving. We also see the Doctor departing from conventions of the time and giving a very proud guided tour of his ship.

The Fragile Yellow Arc of Fragrance is about a perfect world in which people live in perfect aesthetic harmony. Yet these people are only able to fall in love once. Unrequited love inevitably leads to a tragic death. One of the inhabitants of this world has the misfortune to fall in love with Barbara, who is unable to return his affection. It has something of a fairy tale quality (by which I don't mean Matt Smith pretending to be Mary Poppins! That Moffat stuff has nothing to do with proper fairy tales). This is a far cry from the science fiction of later stories. The story is also very heavy in metaphor, which reminds me a little of the Seventh Doctor era.

Carole Ann Ford does a marvellous job of evoking Jacqueline Hill and conceiving Barbara. Yet she is also able to re-create the energy and immature passion of Susan. I love the way she leaps to the conclusion that Barbara must stay or else. John Dorney is very good as Rhythm, although if you listen to this after Farewell, Great Macedon, you will inevitable be reminded of Alexander the Great.

This beautiful but bittersweet little story is the perfect follow-up to the grand epic tragedy of Farewell, Great Macedon.

Posted by Matthew Celestine at 09:14