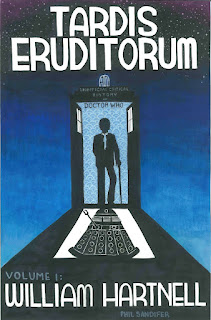 You may have enjoyed reading TARDIS Eruditorum, the blog of Dr Phil Sandifer. The first two volumes of his blog archives are now available in print, covering the First Doctor and Second Doctor eras respectively. We may hope that the next volumes will soon find themselves in print.

TARDIS Eruditorum attempts to chart the development of Doctor Who as a cultural text from An Unearthly Child to the BBC Wales series. I did wonder at one time whether this project was really worthwhile after the very exhaustive About Time, by Tat Wood and Lawrence Miles. However, Sandifer offers analysis of the Doctor Who stories that is a good deal more thoughtful and rather less hurried than that of the About Time books.

Sandifer began his Doctor Who project after graduating with his PhD and finding that job opportunities in his chosen field were rather scarce. I can identify with Sandifer, as I also gained a PhD and then found it to have limited currency in the employment market. Thankfully, I found an alternative career working with drug users and alcoholics.

The blog is written in a somewhat intellectual style. Occasionally, Sandifer loses me, but this tends to be when he gets into discussion with fellow intellectuals in the comment section. He also writes from a strongly left of centre position. Sometimes his socialism can be irritating, but I'm happy to read writers who don't share my conservatism.

That you can read the TARDIS Eruditorum blog for free rather raises the question of why one would want to buy a printed copy. I have no regrets about buying the book and plan to buy future volumes. The book contains some great bonus material, including fascinating essays and some reviews of spin-off material not covered on the blog.


In dealing with the Hartnell material, Sandifer charts the appearance in the show of those things that make the series Doctor Who as we know it- the Doctor's need for companions and his discovery that there are monsters that must be fought. He has a lot to say about what he calls the 'Problem of Susan' (named from the interesting but problematic short story by Neil Gaiman). By this he means textual difficulties inherent in Susan's character which ultimately resulted in her complete disappearance from the show. This ties into wider difficulties connected to the sexuality of female companions in Doctor Who.

Sandifer makes a powerful case that there are no pre-Unearthly Child adventures. He argues that the character we see in that first serial is utterly unequipped to be the Doctor. It is only his interaction with Ian and Barbara that make him into the heroic figure we see in later stories. This was argued on the blog, but is given further exploration in an essay on the Doctor's travels before Totters Lane. I tend to agree with Sandifer on this, though this is problematic for me because I view The Infinity Doctors as a pre-Unearthly Child story (and not an Unbound story). I think Sandifer's thesis of an unheroic older Hartnell is not incompatible with him being a bit more adventurous in the days when he was the younger Hartnell Doctor that I believe we see in The Infinity Doctors. Sandifer has not yet covered The Infinity Doctors, so we shall have to wait to see his view of how that story fits into the Doctor Who mythos.

I very much enjoyed Sandifer's discussion of The Web Planet, seeing it not as a disaster, but as one of the high points of the show. He sees in that serial a delightful exploration of just how weird and unearthly Doctor Who can get. He also joins the chorus of those of us who love the much maligned The Gunfighters. He finds much value in the Dalek spin-off material of the Sixties, arguing that it enables us to imagine the grandeur of the Doctor Who universe beyond the confines of the screen.

In an interesting bonus essay, Sandifer considers the question of whether William Hartnell was a bigot. He condemns two stories in particular for their racial subtext, The Ark and The Celestial Toymaker. It's hard to argue with Sandifer's condemnation of the racism of The Celestial Toymaker. He is appalled that the Celestial Toymaker has been re-used several times by Big Finish. I understand his anger, but I also understand why the character has returned. There is a such a strong sense of nostalgia about Michael Gough's Toymaker. He also cuts a very striking visual image. Yes, it might be racist to have a baddie looking like a Chinese Mandarin, but it is an undeniably impressive costume choice.

Maybe it's because I'm a right-wing bastard, but The Ark is very dear to me. I do think that The Ark can be defended against Sandifer's Post-Colonialist criticisms. Sandifer's reading rests upon the assumption that the Monoid's negative qualities are inherent in their nature and are not a result of their treatment by the humans. I think the Monoid tyranny can be seen as generated by the intolerance and stupidity of the Guardians, an hypothesis that the Doctor seems to allude to in that story. Like it or not, The Ark seems to reflect reality to some degree, as colonialism was often replaced by hideously corrupt and brutal dictatorships. I have heard people who once condemned Ian Smith as a racist bigot admit that in hindsight his opposition to majority rule in Rhodesia made sense.

Sandifer feels so strongly about The Celestial Toymaker and The Ark that he wants to exclude them from the canon of Doctor Who stories. This is unsurprising, as he has argued on his blog against the idea of a 'Whoniverse,' that is, a single unified fictional universe in which all Doctor Who stories take place. He seems to favour instead a canon in the artistic sense of an anthology of recognised texts. This is not my philosophy. Seeing Doctor Who as a unified fictional universe is an important part of how I consume and enjoy Doctor Who. I prefer a canon that is inclusive of as many texts as possible, including more problematic material like that of the Sixties TV Comic. This raises the question of what I would do with Doctor Who stories that contain racism or sexism. For me the answer to that is to regard such texts as unrealiable narrations of the events. Every story is true, but the details may not be accurate. Racially problematic materials can be seen in the same way as zips on the Silurian costumes or Ace remembering Paradise Towers.

For me, the most welcome addition in the book was the essay on whether Doctor Who is the name of the titular character. Yet I was irritated by one statement. Sandifer says "The problem is that there are no dedicated fans advocating for his name being Doctor Who." I am a dedicated fan and I have argued on this blog that his name really is Doctor Who. Maybe I should start referring to the character as such, though this could cause confusion as to whether I am referring to the character or the show.

His glorious essay on The Chase has to be read to be believed. Who could imagine that this silly story was about deconstructing the narrative essence of Doctor Who? That's much more interesting than saying it's 'silly but fun.'

I would heartily recommend Doctor Who fans to buy this book and also the second volume that is now available.
Posted by Matthew Celestine at 07:04