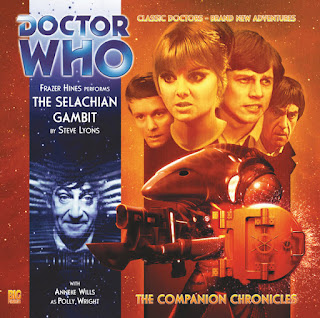 Being written by Steve Lyons, one could be pretty confident that The Selachian Gambit would turn out to be good story. It is also about the Selachians, which is a treat. The Selachians are such a brilliant monster. They have a strong visual image, combined with distinctive voices that work very well on audio. They also have an interesting similarity to the Daleks; being fish, they are small pathetic creatures that dress up in armoured suits to make themselves intimidating.

Like so many Second Doctor stories, The Selachian Gambit is a base-under-siege. However, it is an interesting one because the base in question is a bank. This is a story about a bank robbery, with all the tension and drama that goes with that. It must be said that this is a brilliant re-creation of Season 4, with the fun and creativity that went with that season, a creativity that seemed to dry up in the more generic Season 5. This audio combines action and humour very well, as well as a little social critique.

The Selachian Gambit was performed by Frazer Hines, with additional voice acting and extra narration from Anneke Wills. Hines does a wonderful job of re-creating Troughton's voice. He also captures Michael Craze's vocal mannerisms quite well; though I actually enjoyed Anneke Will's impersonation of Ben rather more. I like the fact that Hines, rather than Wills provides the voice for Lady Sylvia. This is appropriate given that Season 4 was the one in which Troughton went in drag (as also seen in Lyons Second Doctor novel The Murder Game).

The Selachian Gambit is blessed with a lively score that captures both the sense of menace and the fun and nostalgia for the early Second Doctor era. I would highly recommend this audio.

Posted by Matthew Celestine at 03:32