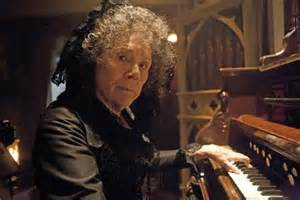 I have seen very little negative feedback in reviews. This ought to suggest that it is a good episode that I just don't like. In fairness, this story does seem to be superior to some of Gatiss' other offerings. Nevertheless, it is not free from some of Gatiss' faults.

Most significantly, like other Gatiss stories, it tries to do far more than the time limit allows. He follows his usual approach of throwing everything in, including the bathroom sink. We have a disease from the Eocene era, Steampunk technology, more stuff about Clara, the return of those Vastra et al, satire about Victorian religion and values and Ada's relationship with her 'monster.' None of these ideas are given significant time for them to have any impact.

The second Gatiss weakness, is his tendency toward silliness. I can take some silliness some times. Delta and the Bannermen is silly in a way that works, as is Robot. But there is a restraint to these stories that enables it to work. The Crimson Horror just feels stupid. Rocket technology in the Victorian era? Come on, that's crazy.

Personally, I can't stand the trio of Vastra, Jenny and Strax. They are supposed to be funny, but are actually just annoying. Yet I did find that it was refreshing for them to take the lead at the start of the episode. Too much of the time, everything is centred on Dr. Who. It was also refreshing to see the Doctor in pain and vulnerable for once.

I am sure STFU Moffat will bring up the horrible ableism seen in the way Ada was portrayed. Her blindness was shown as a source of horror and creepiness, along with the language of being in 'darkness.'

Posted by Matthew Celestine at 09:44