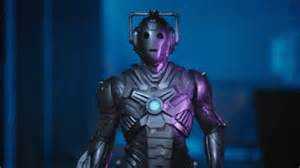 This story got a negative review from the usually faithful Radio Times. Not a good sign. Indeed, it truly was a rotten story.

Having hated The Doctor's Wife, I was really dreading another story by Neil Gaiman. I have read only a few of his writings, but he comes across as just a bit too cool. Like Gaiman's previous Doctor Who story, Nightmare in Silver tries to combine seemingly original ideas with a strong sense of nostalgia, yet ends up falling very flat.

Nightmare in Silver feels very much like a mishmash of several different stories from the classic series. We have the obvious Tomb of the Cybermen reference, future soldiers (Earthshock), Dr. Who playing chess (Curse of Fenric), children being turned into battle computers (Remembrance of the Daleks), the Cyber-planner (The Invasion) and a mental contest (Brain of Morbius). I'm sure I have missed one or two others. Even the Cyberman playing chess was plundered from a Big Finish story.

Central to the story was Dr. Who being turned into the Cyber-Planner and forced into an internal conflict. This felt very tedious. It also did not quite feel quite right for a Cyberman story. A Cybernised Dr. Who ought to be cold and logical, but Matt Smith played the part as demented as he usually does. He came across more like another version of the Master. The Cybermen themselves were just clunky robots and used only as drones. I quite like the Cybermites, but they were underused.

A lot of people have complained about Clara. She switches very easily to the role of military leaders in this story. Her characterisation seems to be whatever a particular script demands of her. She showed little emotional engagement with anything in this story. I'm also not the only one disappointed by how quickly Tamzin Outhwaite's captain was killed off.

The story resolution felt a little too easy- blow up the planet, transmat to the spaceship, then safely home.

I really do hope Moffat, or whoever is producing Doctor Who next time does not hire Neil Gaiman again.


Posted by Matthew Celestine at 07:37