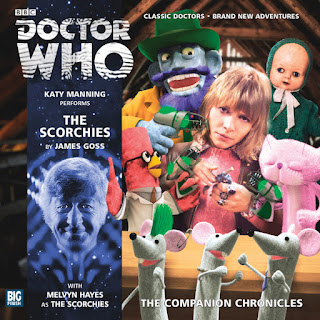 The titular fictional show, The Scorchies, is a sort of amalgam of the Muppets, Bagpuss, Blue Peter and The Clangers. However, the Scorchies are not merely puppets, but an alien intelligence bent on taking over the world. In a bid to stop their evil plans, Jo becomes trapped in their colourful television studio.

I must confess, I actually found this story very frightening and disturbing. The idea of cute puppets on a children's show being murderous and evil was really unsettling. Yet despite this sense of eeriness, I still found it hugely fun and enjoyable. I loved the use of music. The song 'Jo is making a thing' is really catchy and 'The Doctor's Dead,' with its references to enemies of Dr. Who, is hilarious. I also loved the reference to Delia Smith being a celebrity guest on the Scorchies Show.

Jo is one of my least favorite companions, but this is a story that really suits her. Being quite a childish character, she fits into the world of the Scorchies, a world that is very much in the background of the Pertwee era. Katy Manning does a great job of evoking Pertwee's voice, an impersonation that is resonant with her personal affection for the late actor.

My only complaint about the story is that Jo never sings a song. We are told that guests on the Scorchies Show have to tell a story, make a thing and sing a song, yet Jo only does the first two things. The absence of Jo singing a song feels conspicuous and disappointing. We know Katy Manning can sing, because she sang (as Iris Wildthyme) in The Wormery. Nevertheless, The Scorchies is definitely one of the best Big Finish audios I have heard.

Posted by Matthew Celestine at 11:18