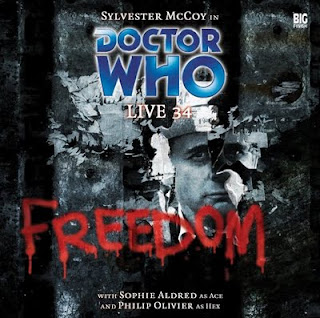 Breaking news on Live 34: The Doctor is bringing down the government!

Big Finish has often shown a tendency to go for very traditional, old-fashioned Doctor Who stories. It is refreshing to get an audio that ditches the standard Doctor Who format. Live 34 is a story told entirely through radio broadcasts. It is a great idea that needed to be tried. I wanted to like this story a lot, so it was quite a shame to find it a little disappointing.

I think this audio could have been more imaginative in its use of different media. Radios do play more than just political interviews and documentaries. I am not sure this audio works hard to keep our interest (except with a few shocking descriptions of unseen incidents of violence). It is difficult to listen to this without feeling rather uninvolved.

My biggest complaint is that the ending falls very flat. We have a deus ex machina solution to the problem of the corrupt regime. We also get a science fiction revelation for the reason for all the killings and disappearances that is not particularly convincing. The audio is also severely weakened by the performances of some of the main guest actors, most notably Zehra Naqvi (as Charlotte Singh) who is not taking it all terribly seriously.

Sylvester McCoy is very strong here, with his vocal sparring in the interviews and at the final confrontation. I do question the idea of the Doctor becoming a politician seeking election. It seems so different from his usual unorthodox strategies. Nevertheless, it is hard to imagine how else he could gain so much airtime on the radio program otherwise.

Sophie Aldred is the same as ever. Philip Oliver is good as Hex, but he is not given a lot to do. I don't warm to this TARDIS team, however, because I am such a big New Adventures fan. I rather feel that the NAs provided sufficient exploration of the development of Ace and the Seventh Doctor. It is unfortunate, but I really don't see what Big Finish can contribute to the Seven/ Ace 'arc.'

I am a bit unclear as to what period in the history of the Whoniverse is set. Most of it suggests the same era as The Happiness Patrol, but the reference to the Earth being 'abandoned' suggests that the authors intended it to be set after the solar flares, which does not seem right.

Live 34 was a brave attempt to do something different, but it falls flat, not least because of the lack of ideas.
Posted by Matthew Celestine at 03:02