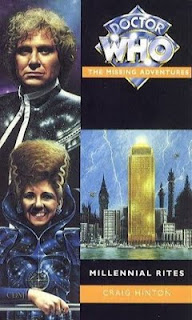 "Anne placed the glass on the table. 'Yog-Sothoth? Now why does that sound familiar?'

'It's the Intelligence's real name and it crops up in certain arcane literature from time to time. Over the billennia, he mounted thousands- millions- of campaigns against inhabited planets, trying out the gambits and games that he had played on computers in his previous existence. On Hiskith, he chose to use the Hiskith version of Koala bears to invade; on Danos, domestic animals- like dogs- were the vanguard. And on earth, well the Intelligence seemed to have a fondness for Tibet and the Yeti.' The Doctor held up his hands. 'Don't ask me why. Perhaps some childhood teddy-bear fetish.'"

I quite like Millennial Rites. It is hardly the greatest Doctor Who novel, but it is enjoyable and is easily better than his later Sixth Doctor novel, The Quantum Archangel. Two factors made me want to read it; the influence of Lovecraft (this is thematic, rather than stylistic) and the fact that it dates UNIT to the 1980s, contrary to other Virgin novels.

Millennial Rites has been criticised for all the heavy continuity stuff with Anne Travers and the Great Intelligence. This misses the point. It actually plays a trick on the unknowing reader, letting them think that this is a sequel to Web of Fear, with the Great Intelligence behind it all, when in fact the alien menace is something else entirely. Anne Travers herself is portrayed in typically grim Virgin fashion as an angry and embittered woman. I don't have a problem with that; why should everyone always be grateful to the Doctor? I am a bit annoyed that Hinton kills her off at the end though (why do Virgin writers have to do that?).

Things get very weird when reality is reshaped and London turns into a place resembling an hybrid of a Michael Moorcock novel and Warhammer 40K. The main characters all take on important roles in this bizarre role-playing game style world. It is quite a clever idea.

Craig Hinton does a good job of portraying the Sixth Doctor. Of course, he brings up all that stuff about the Valeyard. It is good, but personally I am a bit sceptical of the claim that the Valeyard really is the Doctor. I suppose I shouldn't be, being a broad canonist (the novels and audios mostly seem to take the claim at face value), but I just feel it is too bonkers an idea to be assumed as truth.

Mel is brilliant in this book. She gets a much needed rehabilitation. She is presented as cheerful and moralistic, but also clever and resourceful. She is very much like the Mel we see in the audio, The Juggernauts. The minor characters have something of a soap opera quality, though they are well-rounded.

The reference to Rachel Jensen in Remembrance of the Daleks peaked my obsessive fannish side, not least because I consider her to be the most sexy character to have appeared in Doctor Who (including that Burberry-clad chav, Romana I). We are told that Anne Travers replaced Jensen as scientific advisor to the cabinet in the 1980s. This surprised me because Jensen was talking about retiring and growing Begonias in Remembrance and I assumed that she was in her late forties or early fifties in 1963. More recently I read John Peel's novel War of the Daleks that states that Rachel Jensen was in her mid-thirties in 1963. While that age description makes her talk of retiring in Remembrance of the Daleks odd (perhaps she was married and could live off her husband's income?) does fit better with the idea of her being scientific advisor to the cabinet in the early 80s. I can't believe it, this is the longest paragraph in this review- you can see where my priorities are. Anyway, Millennial Rites is a good novel.
Posted by Matthew Celestine at 04:57