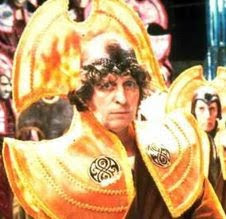 Like the previous season, Season 14 is one of the most popular seasons in the history of the show. It is widely regarded as the best season of Doctor Who ever. I am therefore offering a dissenting voice in expressing my dislike for it.

While I like some of the stories in the previous season more than the stories in Season 14, I do think Season 14 made improvements over Season 13. Season 14 is much less reliant than the previous season was on borrowing themes from classic horror movies. The departure of Sarah Jane Smith was also an improvement. I can't help thinking of the Fourth Doctor and Sarah Jane Smith as the 'vanilla' TARDIS crew. There was a real need for a new kind of companion and introducing Leela was a bold and generally successful change. Certainly, Tom Baker had less chemistry with Louise Jameson than he did with Elisabeth Sladen. I would suggest that this was actually a good thing. The rapport between Sarah and the Doctor was a little too strong and did not come off very naturally. I quite like the fact that it is quite apparent that the Doctor does not like Leela very much. I see no reason why the Doctor should always like the people he travels with. After all, as he said in Logopolis "I never choose the people I travel with." Like so many others, Leela barged her way into the TARDIS.

Hinchcliffe had the idea of the Doctor pursuing a kind of 'Eliza Doolittle' style project with Leela. He had this idea that the Doctor was trying to educate her. Personally, I hate this idea and am glad that Graham Williams did not pursue it; at least not very consistently. Perhaps it is because I was overexposed to feminist literature at university, but I find the whole notion rather patronising and chauvinistic. Since when has the Doctor been interested in educating and 'civilizing' people? I much prefer the idea that the Doctor keeps her around because he finds her funny and is useful for threatening people.

Although Leela's Season 14 costume has delighted many a male fan, I don't find it very believable. It looks far too tailored. Realistically, I think somebody from Leela's tribe would be more likely to wear a more loose-fitting tunic (the Season 1 dress version of her costume actually looks more realistic). I am also unconvinced that a primitive society like hers would be able to make such well-made boots (I'm not even going to go into the knife). Leela would probably have been more likely to have gone barefoot in real life, like the cave-people in An Unearthly Child.

In Deadly Assasin, the production team made the bold move of not only making a very different kind of story, but also showing Gallifreyan society close up. The results are mixed, but mostly unsuccessful. There is a real sense of darkness and corruption, as well as an arcane sense of history, however there is none of the grandeur and incredible power that we should expect to see in the Time Lords. It is absurd that the Doctor seems to know more about Gallifrey and it's history than anybody who actually lives there. Even worse, the Time Lords have no idea where their energy comes from, even though the Doctor manages to figure it out pretty quickly (what was Robert Holmes thinking?).

The levels of violence and horror continued to increase in this season. When the Doctor attempted to drown Chancellor Goth in the Matrix, everyone except Doctor Who fans realised that Hinchcliffe had gone too far in allowing excessive violence on a family show. This incident demonstrated that a new producer was needed to clean it up and tone things down. In the last two stories of the season, levels of morbid horror reach new depths. The murdering robots of Robots of Death are shockingly distasteful and the slow and gruesome death of Chang in Talons of Weng-Chiang is shocking.


The Masque of Mandragora (4/10)- Historical settings often make for a lavish production, but do not always result in a good story. It suffers from a lack of interesting characters and the Helix lacks menace. The writers also show a poor understanding of the Renaissance era.

The Hand of Fear (4/10)- A story with a very old school Doctor Who feel. The first part is fast-paced, but the scenes on kastria are very poor. Sarah Jane Smith gives a very hyperactive performance on her last serial.

The Deadly Assasin (6/10)- A bold experiment that is not terribly successful. Gallifreyan society is interesting in this story, but not very believable and rather disappointing. Excessively violent.

The Face of Evil (4/10)- Slow and dull. Computers make very poor villains. On the other hand, dealing with the long-term consequences of the Doctor's actions is interesting and original.

The Robots of Death (6/10)- Another story that I hate. The robot design is great, but this tale of murdering robots is quite tasteless and sadistic. It fails completely as a murder mystery. Nice performances from Tom and Louise though. Pamela Salem also gives a great guest performance. She appears again as Rachel Jenson in Remembrance of the Daleks.

The Talons of Weng-Chiang (7/10)- A story adored by nearly all fans. The script is great with some wonderful humour, but it's rather padded. It's also bit of a Victoriana overload. Leela does not come across very convincingly in this one either. Excessively gruesome in a number of places.
Posted by Matthew Celestine at 07:01