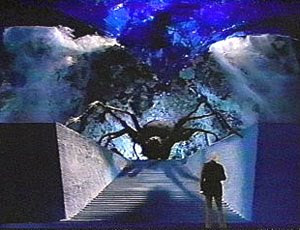 In my judgement Season 11 is the worst season in classic Doctor Who. Apart from the first story, The Time Warrior, it is appallingly bad. Pertwee had simply been in the role too long and his performance was wearing thin. A change was desperately needed at this point.

The season started off promising; that awful Jo Grant had gone, we had a great story in The Time Warrior with a great new monster and a refreshing new companion. Yet things rapidly slipped in the remaining stories. Most noticeable is the shockingly low standards of scriptwriting in this season, though there is plenty of poor acting and badly thought out effects too.

Aside from it being the last Pertwee season, Season 11 is most notable for the introduction of Sarah Jane Smith, played by Elisabeth Sladen. Sarah has the reputation for being everybody's favorite companion and is fondly regarded by all fans. While Sarah is a refreshing change from Jo Grant, who was truly diabolical, I would have to dissent from the opinion that Sarah was the best companion. The problem with Sarah is she never really came across as a convincing human being. She always seemed like she had been genetically engineered for the purpose of assisting the Doctor. She was brave, but still screamed. She was independent, but still did what the Doctor told her. She was plucky, but always ended up needing to be rescued. She would moan, but always be determined to help the Doctor save the day. She simply comes across as too much like a tailor made Doctor's companion. On the whole, I prefer companions like Tegan and Peri, who have a somewhat less harmonious relationship with the Doctor.

A well thought out story with a magnificent script. The Sontarans get a nice introduction and Sarah Jane Smith is a character that one warms too quite quickly (even if she does not come across as terribly smart).

It's not the best production and some of the acting is poor, but it is still a good story.

Invasion of the Dinosaurs- 2/10

A plot so stupid it insults the intelligence of the audience. The final death of the overused 'Yeti in the loo' concept. Mike Yate's treachery was a brave idea, but it does not save this serial from much deserved ignominy.

A dull and cliched Terry Nation space adventure with some Von Daniken idiocy thrown in.

A dull and pointless sequel. It's nice to see Alpha Centauri again, however.

This story is a mess. Pointless car chases, ropey spiders and far future yokels all thrown together. I quite like the idea of demonic spiders and the Great One looks quite good, but the smaller spiders are a lot less impressive.

I quite like mystical elements in Doctor Who, but the Buddhism in this story is just a bit too overt. It does not seem right watching the Doctor bowing and scraping before religious figures. I certainly can't imagine the Fourth Doctor doing that. The idea of the Doctor having a guru makes him seem like some dizzy 70s rock star.

Thankfully change was on the way.
Posted by Matthew Celestine at 03:54