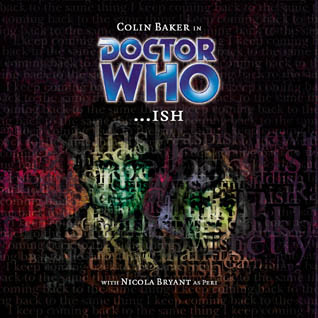 The Sixth Doctor and Peri do battle with a malevolent word.

The audio drama medium has some very obvious limitations. Philip Pascoe managed to produce a drama that is crafted to work with those limitations. It's hard to imagine how this story would work in another medium. It would not even a work as a novel, as you would not get the benefit of hearing the sound of the language used. This is a story all about language; a story that positively delights in the beauty of words in the English language.

...ish is also a story that is ideal for Colin Baker. His Doctor was always the most eloquent in engaging in witty wordplay. Here he gets to show off the Doctor's gargantuan vocabulary. For once, the Sixth Doctor is paired up with Peri; a duo that Big Finish has not used much. Perversely, I have come to really like this team, as it shows up the Doctor's nasty side. Here Peri is used really effectively and is allowed to actually come across as intelligent.

Season 18 saw writers mixing in an awful lot of Platonic philosophy. This Hellenist influence can be seen here, but ...ish looks just as much to Hebrew as Hellenist thought. The notion of words have mystical power is very strong in Judaism, especially in the magical ideas of the Kabbalah. In the Christian tradition, Christ is described as the logos or Word in the first chapter of John's gospel. I do love it when Doctor Who brings in these mystical and philosophical ideas.

At times some of the exposition is hard to follow in this story, making some of the plot details a little obscure on the first listen. Nevertheless, this does not stop one drinking in the superbly crafted dialogue. ...ish also creates a rich and esoteric atmosphere that is quite overwhelming.

...ish is a refreshing drama amidst all the rather overly traditionalist and unambitious stories that Big Finish put out. They really should have tried to do more stories like this that push the boundaries of what Doctor Who can do.
Posted by Matthew Celestine at 09:36