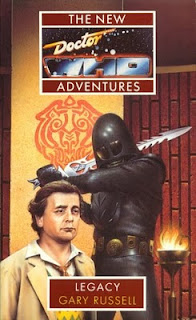 "The Doctor did not venture into Ace's bedroom too often. He was almost frightened of what he might find there. Discarded cans of Nitro-9, half-eaten MacDonalds, he'd once seen her knock the stuffing out of a large teddy bear with her old baseball bat, swearing at it and accusing it of betraying her. A short while later he had sneaked in whilst she was having a bath and found the wrecked toy. On it's shabby back was the name Mike Smith in permanent black ink. That was when he realised how much he had misjudged Ace. How he'd never really noticed how much she had kept bottled up."

What is it about Peladon that seems to inspire endless sequels? Curse of Peladon was a great story, but one can't help wondering why it needed the appalling sequel, The Monster of Peladon. More recently, Big Finish gave us Bride of Peladon. I don't think that Gary Russell's Peladon novel adds an awful lot to the mythos, even if it is reasonably diverting. Legacy gives us the usual fare- friendly Ice Warriors, a well meaning king, a bigoted high priest(ess), Alpha Centauri and a self-serving villain.

Legacy is by no means badly written. It is a fairly interesting story, even if it does plod along rather slowly. It is filled with continuity references, some of which are a bit silly. I don't think we particularly needed an explanation of the Time Lords' sending the Third Doctor to Peladon. There is a really stupid in-joke on p.88. I must admit I found the cameo appearance of Mavic Chen rather cool.

The Ice Warriors are well served by this book. It's great to read them so well portrayed. We even get to 'see' them without helmets. Bernice becomes particularly affectionate with Ice Lord Savaar. Alpha Centauri seems true to form, though he is less interesting in print than on screen. Gary Russell does a good job of portraying the Seventh Doctor. Ace is unfortunately not given an awful lot to do.

Atissa is a dreadful cardboard cliche. One question on my mind: were there always female high priests on Peladon? If there were, it seems odd that Peladonian society seems so sexist (being high priest is one of the two top jobs). If female high priestesses are a new idea, then Atissa's whole ideology is hopelessly inconsistent.
Posted by Matthew Celestine at 09:00