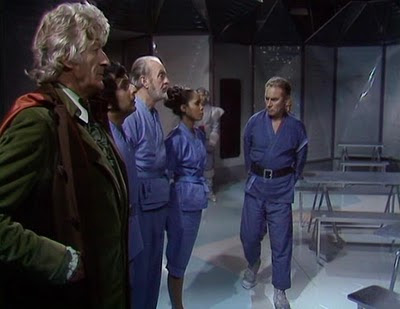 Thankfully this season saw the departure of that awful Jo Grant woman. Unfortunately, that did not occur until the season finale and she continued to annoy throughout.

Season 10 sees the growing emergence of continuity. In the first story we get a celebratory reunion of the first three Doctors. This story also gave the first glimmer of Time Lord history (even if the name Gallifrey still had not been revealed). Later in the season, viewers were granted two interconnected Dalek stories. Thus, the history of Doctor Who as a fictional universe was beginning to be established.

For the first time, viewers got to see more than one Doctor at the same time and compare them. A pity that this both a confused story and an atrocious production. Patrick Troughton rather steals the show, though Omega is well conceived and played. Katy Manning gives the most diabolical performance of her Dr. Who career in this story.

Although they do look silly, I have a certain fondness for the 'Gell Guards.' They remind me of Lovecraft's Shoggoths.

How did that get in here? This story really is a diamond in mud. With it's postmodern irony and camp comedy it actually feels like it ought to be in Season 24 (though it is better than every Season 24 story, even Delta and the Bannermen). Does anybody else find it really easy to imagine this story with the Seventh Doctor and Mel?

We get a sneak preview of future regular Ian Marter too.

The basic premise of this story is quite inviting, but it's so tedious. The Doctor and Jo go through a cycle of capture and escape followed by re-capture. The presence of the Ogrons rather gives away the fact that the Daleks are behind it all.

On the other hand, the Draconians are really well designed and the Master is very effective here as a cosmic manipulator. On the realism front, the Doctor has his fancy dress clothes replaced by a prison uniform, even if the mixed-sex correctional facility does seem a little odd.

A tedious jumble sale of Terry Nation stock plots. Even watched as weekly episodes it starts to get old.

It's irritatingly cosy and one that will invariably annoy somebody like me who dislikes the Pertwee era. On the other hand, it's flaws are fairly minimal and it is quite well thought out and produced. The Doctor's sadness at Jo's departure is a nice touch, even if it does strengthen the impression of the Third Doctor as a sad old man.

Is it really feasible that mutated maggots would be immune to gunfire and explosives? I suppose they would have had a hard time getting six episodes out of this story if they were not.
Posted by Matthew Celestine at 05:22