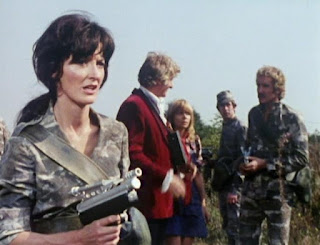 What I love most about this story is just how similar it is to the Terminator films. Rebels going back in time to prevent nightmare future and evil robots trying to stop them. I'd definitely rather watch Day of the Daleks and I think this serial is actually more believable than the Terminator movies. The idea of machines taking over the world is nonsense. Computers don't have minds. A robot, no matter how advanced is no more likely to take over the world than an electric kettle.

On the other hand, while the superficial Terminator similarity is fun, one is painfully aware that not everything is great about this story. For everything that is good about it, there is something that is not so great. It is very much in the middle rank of Doctor Who stories.

Most obviously, the use of the Daleks is not so great. The story was not originally intended to be a Dalek story, but a decision was made at a late stage to write them in. It has been a few years since the Daleks had been used in Doctor Who and the story does not quite seem able to get them right. Their voices are off and they lack menace. We are also denied a scene in which Dr. Who confronts the Daleks. Admittedly, this might be for the better. Pertwee was not the strongest actor to play the Doctor and he felt awkward interacting with the Daleks. It is hard to imagine Pertwee doing an job of confronting the Daleks. The final battle between UNIT and the Daleks is simply awful to watch. Few fights in Doctor Who have been as disappointing.

There are also a few problems with the plot. The whole time travel plot makes little sense. It also seems bizarre that the rebels would blame Reginald Styles for the explosion and not a terrorist group. Was terrorism not the problem that it was for us in the Doctor Who universe?

The Ogrons are an interesting addition as allies of the Daleks, but it is hard not to be uncomfortable with the Doctor dropping his usual pacifist stance and shooting down Ogrons. It's presumed okay to kill them because they are a big, stupid and dark-skinned.

What is great about the story is the moral complexity. The Controller is a villain with genuine reasons for being a villain and is quite understandable. The rebels on the other hand, come across as pretty thuggish. I imagine being right-wing and pro-establishment, I would easily be taken in by the Controller's lies just like Jo.

This is also a serial in which Pertwee is at his best. While he does not get to confront the Daleks, he does have so many brilliant scenes, such as his argument with the Controller and his weary, exhausted interrogation. I'm not much of a Pertwee fan, but in this story, we really see him at his best.

Day of the Daleks is a story with some bold ideas and a radically different approach, even if its execution seems a little poor at times.


Posted by Matthew Celestine at 03:30