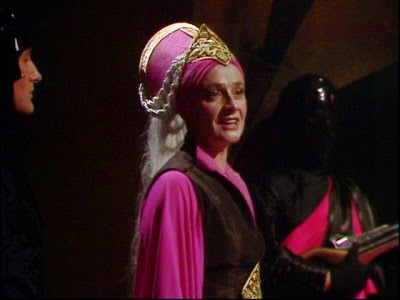 I am a huge fan of Season 18 and consider it to be the strongest season of the show (the only other contender being Season 25, which is let down by Silver Nemesis). Meglos is unfortunately the weakest story of an otherwise brilliant season. However, Meglos is not nearly as atrocious as it is sometimes considered by fans and shows the consistent improvement in quality between Seasons 17 and 18.

Central to John Nathan-Turner's agenda for his first season as producer was in improvement on production values after the sloppiness of the Graham Williams era. This is very much evident in Meglos, with the spacecraft design, the costumes and the the appearance of Zolpha-Thura. Tigella is perhaps less effective as a planet, with the jungle looking a little unimpressive. More importantly, the brilliant musical score helps to give the worlds of this serial an haunting sense of atmosphere. As even critics of Meglos agree, the spiny make-up effect on Tom Baker is extremely impressive and disturbing. Meglos is certainly an interesting character, a disembodied intelligence manifesting in a cactus. It reminds me a bit of Vulthoom from the Klark-Ash-Ton story in the Cthulhu Mythos.

We also get Jacqueline Hill returning to the show in the role of Lexa. Admittedly her part as a closed-minded fundamentalist is a rather cliched one, with little for her to develop, yet she still gives a lovely performance.

The Chronic Hysteresis is rather less impressive, as well as being scientific nonsense. The scene goes on rather to long, even if Lalla Ward does a good job of appearing distressed by the absurd situation.

I always love carnivorous plants, so I quite like the Bell Plants, even if they are not terribly impressive. It would not be long before the BBC put Doctor Who completely to shame with the brilliance of its Triffid monsters in their own series. 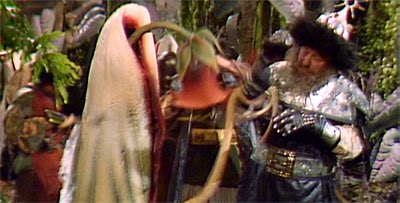 Part of the charm of Meglos is that it is an old-fashioned space adventure that goes to strange and exotic worlds. The presence of Jacqueline Hill is rather appropriate, as it very much evokes the spirit and style of the Hartnell era. This willingness to create exotic worlds is something sadly lacking in the new series.