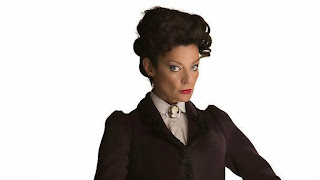 The first fifteen minutes of this story are pretty amazing. We see Danny killed, Clara venting her rage at Dr. Who and appearing to have him at her mercy until he turns the tables on her and then his announcement that he will help her get Danny back from 'hell.' This is incredibly powerful drama and gives Capaldi exactly the kind of material he can deliver like diamonds.

Things get a bit more wobbly once we enter the bizarre pseudo-underworld. It did seem remarkable that the Doctor believed he could take the TARDIS into the afterlife. I was a bit confused by the scepticism he later showed once he got there. Did he believe in the afterlife or not, and if not, why did he expect to find Danny somewhere?

The afterlife is somewhere that Doctor Who should not explore. I'm rather glad that this afterlife turned out to be fake, but the episode probably went a little too far. I know that if I had watched this as a child, I would have been troubled by the apparent conflict with my Christian beliefs. I agree with the Radio Times review that said the idea of cremated people being in conscious torment was insensitive and distasteful. This episode could have been very upsetting for people who had seen a bereavement. The level of darkness here was probably a bit much for younger viewers.

So Missy turns out to be a female incarnation of the Master. Most fans had guessed this as possible, but I had expected her to be some disappointing throw-away character like Kovarian. A female Master is an exciting idea and nobody can fail to love her twister Mary Poppins guise. Her pretense at being a droid is a nice reference to either Scream of the Shalka or Planet of Fire and the sort of camp trick the Master would play. On the other hand, her kissing Dr. Who is a bit of a throwback to flirty River Song, reminding us of the difficulties Moffat has had writing female characters. I also feel a sense of dread at the thought of the Master coming back. A female Master is still the Master; a character with ludicrous schemes that always scuppered and who comes back again and again. No doubt Missy will be killed in the big season finale only for the next producer to find a contrived way to bring back a new Master.

I don't have high hopes for the next episode. The Cybermen harvesting the dead and invading London is hardly a very original idea. This story is starting to feel a lot like a story that RTD did a few times.

Posted by Matthew Celestine at 09:16