The Enemy of the World (the real thing this time) 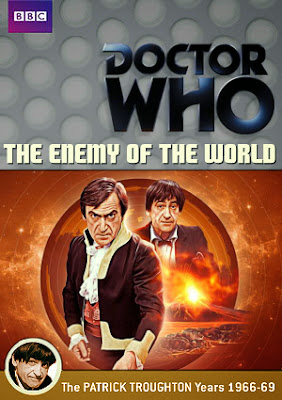 I reviewed the audio version of this ages ago, but having watched the rediscovered episodes, I had to review it again.

If any story in Season 5 deserved to be rediscovered it was The Enemy of the World. Season 5 is popular with many fans, but I find the run of bases-under siege a bit tedious, even if Fury of the Deep has an interesting monster. Enemy of the World is different; a story with no monsters, that is driven by human drama, interesting characters and surprisingly effective James Bond visuals. It feels such a refreshing break within thsi most predictable season.

The Enemy of the World succeeds because it is a story driven by character. It is about a corrupt dangereous world of the near future and about the people that inhabit that world. We have such a fantastic cast of characters; the abused but dignified Fariah, the sincere but doomed Dennes, the cynical Australian chef Griff, the self-serving Kent and of course, the brash megalomaniac Salamander. Griff contributes absolutely nothing to the plot, yet in him we see how a person in a terrifying and brutal environment can survive through humour. Likewise, the moment when Dennes jokes about it being a long time since his food was cut up for him shows such basic human dignity in the face of certain death.

Troughton's Mexican accent is a bit odd, but his portrayal of two roles is simply amazing. Particularly delightful is the way he plays the Doctor impersonating Salamander and he manages to make the impersonation distinct from the real Salamander.

Before the rediscovery of these episodes, there was always an uncertainty as to whether the visual elements of this story really lived up to their grandiose aspirations. The answer turned out to be that they did. For a Doctor Who story, this is remarkably visually impressive with the helicopter and hovercraft scenes. This is a clear tribute to the strength of Barry Letts' direction. Even in the later episodes, where things get more obviously studio bound, we get a great shot of the lift shaft to Salamander's lair.

If the story has a significant flaw, I would say it is the way things shift once Salamander's game is revealed. Once we move away from the corrupt backstabbing of Salamder's court and into his underground den, we enter more generic Doctor Who territory. It feels uncomfortably like Invasion of the Dinosaurs.

Jack Graham over on Shabogan Graffiti offers some good comments on the complex racial politics of this story. While it is great to have a black actress playing a significant role in a Sixties Doctor Who story, the fact she plays a standard racial role as a slave is problematic. Even worse, it is implied that she did something wrong and it is her fault she is a slave. Any critique of racism is rather muted by the fact that she is enslaved by a Mexican, rather than by a European white man (Troughton bronzing-up is problematic in itself). Of course, it might be assumed, with Troughton's European features, that Salamander is a Mexican of primarily European descent. There are lighter-skinned Mexicans and no doubt some of them are racist toward black Mexicans of African descent. I am reminded of the X-Files episode El Mundo Gira, in which we meet an immigration police agent who assists Mulder and Scully. His accent and cultural outlook indicate he is of Mexican, or at least Latin American origin, though his fair skin indicates European descent. He posesses a status and privilege that contrasts massively with the darker-skinned Mexican illegals that we meet in the episode and he displays to them an attitude of racist contempt.


The recovery of this story was truly a delight for Doctor Who fans in the 50th anniversary year.


Posted by Matthew Celestine at 23:00