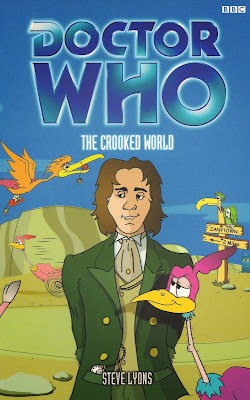 How could you not want to read a book with such a remarkable cover?

In Crooked World, the 8th Doctor, Fitz and Anji arrive in a strange world with different physical laws. The inhabitants are indestructible, observe oddly repetitive illogical behaviour patterns and nobody has sex; babies are delivered by a stork. The inhabitants also resemble the characters of classic cartoon shows. We have stand-ins for Porky Pig, the gang from Scooby Doo, Penelope Pittstop and quite a few others.

On the surface, Crooked World appears quite similar to Steve Lyons New Adventure novel, Conundrum. In both stories, the TARDIS crew entered a world of fictional tropes. Yet Conundrum experimented with a very different style of narrative technique. Crooked World is very much a conventional Doctor Who story in its structure. The TARDIS crew arrive on a strange alien world, they get split up and have to learn the rules of how this world works. In exploring fictional tropes, Conundrum felt quite original back in the Nineties. This story feels a lot less groundbreaking. I can imagine a postmodern enthusiast like Phil Sandifer dismissing it, as he does Conundrum and its sequel, Head Games. However, like most of Steve Lyons' novels, it is very well written and very enjoyable.

While there is plenty of humour in this, Lyons makes it all remarkably straight, perhaps sensibly. The cartoon characters are all very serious and seem surprisingly angsty once they start reflecting on their trope-driven lives. The story leads into a big discussion of the topic of free-will. This does not get beyond a very shallow covering of the topic, but indirectly one can take from this the sense that in a world where it was impossible to harm others, there would be little room for moral growth. One could certainly develop that into a theodicy.

The Doctor is as enthusiastic as ever about this world. Fitz makes an ill-fated attempt to get Angel Falls (stand-in for Penelope Pittstop) into bed. Anji, cool and rational as she is, finds this surreal world utterly bewildering. The 8-Fitz-Anji teams was one of the strongest ever TARDIS teams, being so different from other companions and this is a story that suits them really well.

Thankfully we are spared an inane scientific explanation of the cartoon world. It is left quite mysterious. It is perhaps a little odd that the TARDIS crew don't comment on the similarity of the inhabitants to cartoon shows. Do those not exist in the Doctor Who universe (I've heard Anji had referred to Scooby Doo in a previous novel).

Like the best of the 8th Doctor novels, Crooked World tells an interesting and creative story.

Posted by Matthew Celestine at 05:51